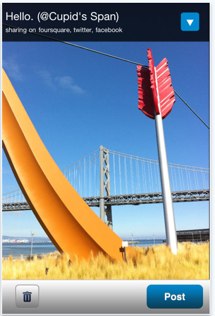 We’ve written about the launch of Picplz, a photo-sharing application being developed by imeem execs Dalton Caldwell and Bryan Berg. The startup initially rolled out an Android app earlier this year and today is debuting its free iPhone app in the App Store.

Similar to the Android app, Picplz for the iPhone wants to be a dead simple way for users to share the photos they take on the phone on the web. Pictures taken with picplz are synced to your profile on picplz.com and tagged with your location and place. And you can post directly from the app to Facebook, Twitter, and can also check-in to Foursquare when you take a picture. The app also allows you to follow other users’ photo streams, similar to the Twitter model.

Foursquare doesn’t allow you to upload photos with your check-in, so Picplz provides a more image-friendly way to do this (though Foursquare is planning to add this in the future). Of course, Facebook also launched their location-based feature, Places, last week, that allows users to post photos to a particular place.

But Caldwell says that the focus of Picplz is more on photos than the check-ins. And he adds that Picplz wants to be an easy way for anyone to easily transfer and publish their mobile pictures to the cloud with the least number of clicks.

Picplz launched on the Android platform first because the startup wanted to take advantage of background support, which only came to the iPhone with iOS4 recently. Picplz has also made a few improvements in iPhone app from feedback they received from Android users. Adjustments include an improved welcome screen, and UI. And Caldwell says the Android app has seen a fair amount of traction with 50,000 downloads since April.