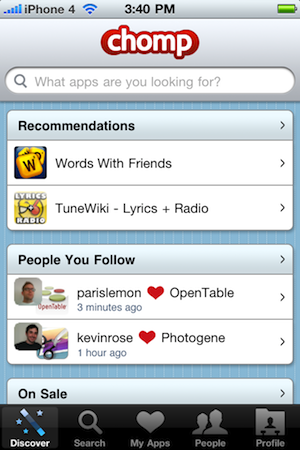 It was last November that we first heard about Chomp, a sort-of Yelp for iPhone apps. At the time, it was still very much in stealth mode, but we kept hearing they raised a seed round of funding from investors like Ron Conway insanely fast. Obviously, we were interested.

By January, we had a sneak peak at the actual service. And about a week later, it formally launched as an app recommendation engine for Apple’s App Store. Another larger round of funding quickly followed, and since then Chomp has been off and running with over 400,000 active users at this point. But now it’s time to take things to the next level — with search.

App discovery in the App Store still basically sucks. There’s the main page which Apple’s curates (and does a nice job with). But beyond that it’s pretty much a nightmare. Discovery is continually under attack by developers trying to game the system by putting bogus words in their titles. And with over 250,000 iPhone apps out there now, there simply needs to be a better way to find the best ones.

Of course, that’s what Chomp has been doing. But up until now, they’ve basically only been doing it based on recommendations from your social graph on Chomp. Yes, there has been some basic search functionality, but it has been no better than the one Apple provides (again, pretty lousy). Today brings the launch of a completely revamped search engine for apps. And notably, it’s in both the Chomp app and on chomp.com.

Co-founder Ben Keighran calls this latest version of Chomp “the most personalized way to search and browse for apps.” He notes that the addition of topic-based search is going to change the way people discover apps. “Imagine having to to go Google and search for ‘www.facebook.com’ — rather than just searching for ‘social network’ and having Facebook come up as a result,” is how he puts it.

Competitors like Appsfire are out there also doing search, but they’re also mainly title (and description) based. In Keighran’s mind, this isn’t enough.

He notes that previously beyond simple name searches results would show up based on popularity of the app. While this isn’t the worst way of doing it, Keighran believes the 50 million recommendations that users have already seeded into Chomp will provide a much better way. “We have a lot of data to build a semantic search engine,” Keighran notes. “We have our own Chomp user sentiment.”

He also notes that they have more reviews in many cases than Apple itself does on apps. The reason is that Chomp makes it very easy to do a review — you say whether you hate the app or love it. And if you want, you can leave a 60-word comment.

Keighran also says that Chomp’s system is better than Apple’s own Genius feature for apps because that’s simply based around what you’ve downloaded. This is all about what people you trust enough to add to your social graph have downloaded and love.

All of this points towards Chomp’s larger goals: to be the place people go to find the best apps no matter what platform they’re on. Currently, Chomp only works for native iPhone apps and web apps for the iPhone, but Android and iPad app search/recommendation is in the works.

Keighran sees a future where apps are everywhere, and people need a single place to find the best of them. Yes, kind of like Google for the web. “This is like the web in 1996,” he says. If this future is realized, he envisions Chomp as having 10 million users by the end of next year. A lofty goal, but perhaps not an insane one.

And if they can get to that size, Keighran sees a lot of money to be made. Sponsored search and recommendations will be a huge business — again, at scale. For now, Chomp is making a small amount of money via affiliate fees from Apple every time someone buys an app by way of Chomp.

So what does Apple think about Chomp one-upping them in app discovery? “Apple is insanely excited about this,” Keighran says. Undoubtedly Google is excited for Chomp to come to Android too. Because this is a very real problem across all platforms and one that’s only growing in size. 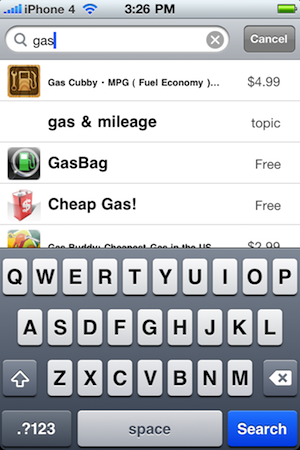 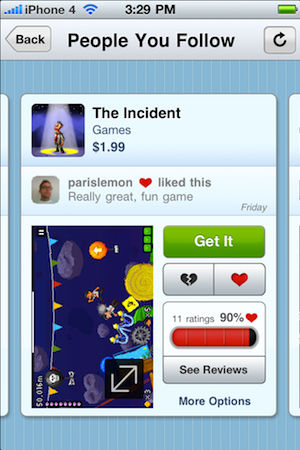 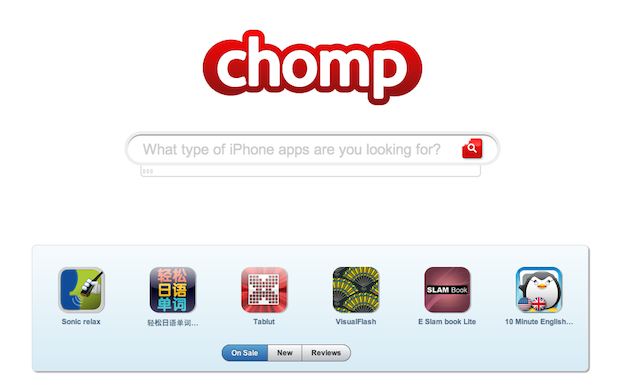 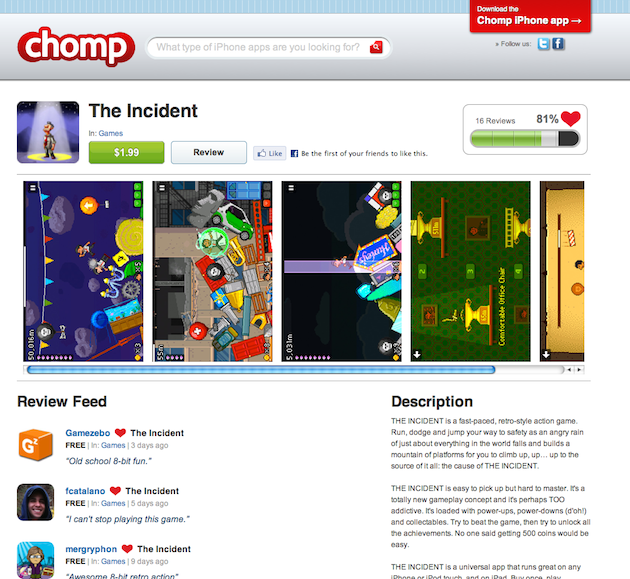