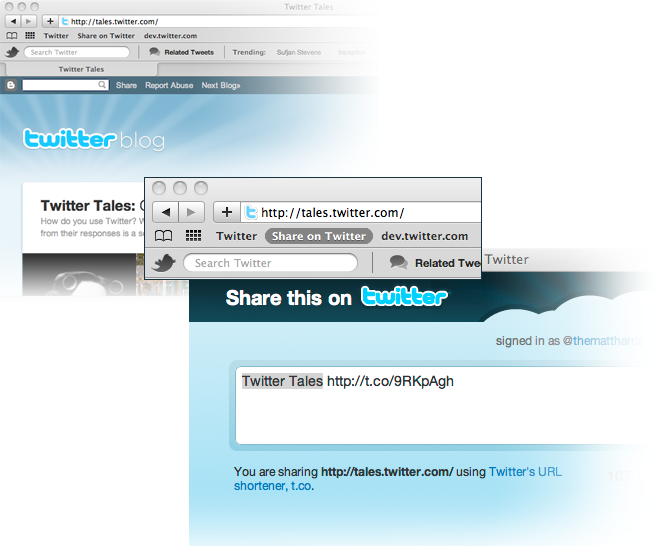 Twitter continues to round out its collection of official widgets, buttons, and apps with a new addition today: an official Share Bookmarklet, which lets you share a webpage using Twitter’s official t.co link shortening service. You can grab the bookmarklet right here.

It works as you’d expect: you install the bookmarklet by dragging it into your browser shortcuts, then hit it whenever you want to tweet about the page you’re currently viewing. This brings up a Twitter-themed popup window pre-populated with a shortened link. It also has one other neat trick: the bookmarklet will sometimes offer recommended Twitter users for you to follow depending on what page you’re sharing.

This continues Twitter’s relatively recent trend of offering officially branded features beyond what’s available on Twitter.com — and filling the holes that third party apps and services previously occupied. Of course, there aren’t many Twitter-related startups built around a Twitter bookmarklet alone, so this is a relatively minor hole that Twitter is filling. Twitter did fill a big one last week, though, when it took over TweetMeme’s Tweet button, which is integrated on sites across the web (including TechCrunch).

Given the current trend, I wouldn’t be surprised if Twitter eventually begins offering its own browser extensions as well. Update: Turns out they already have an official extension for Safari (thanks to Miguel Rios for the heads up).