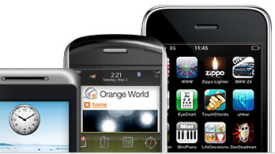 In an update, the firm says the global smartphone app market has in fact already reached $2.2 billion in the first six months of this year.

Also according to research2guidance’s findings, mobile application download numbers reached a total of 3.8 billion in the first semester of this year, compared to 3.1 billion in 2009 (full year, to be clear).

The firm attributes the strong growth numbers to the success of Apple’s App Store, Android Market and other mobile app stores like Ovi Store and Blackberry’s App World.

In the future, they expect growth to also come from niche stores for verticals such as business or health.

The research organization’s projections are fairly conservative compared to others. An independent study released last March by app store company GetJar indicated that the market for mobile apps could grow to a whopping $17.5 billion – thus overtaking CD sales – by 2012.

In an earlier report, research2guidance posited that the big surge in applications will also be driven by a fast-growing number of smartphone users worldwide, which the research company estimates will increase from about 100 million in 2009 to nearly 1 billion by 2013.