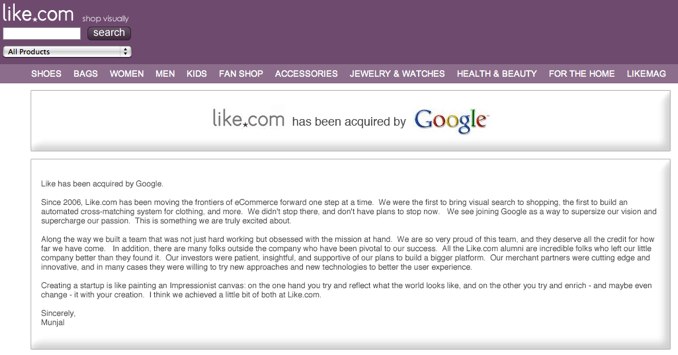 It’s official. Google has acquired Like.com. In a post on Like.com’s homepage, the company’s CEO and Founder Munjal Shah writes that the visual search engine has been bought by Google. We originally reported the acquisition last weekend. While terms of the deal were not disclosed, we’ve heard it’s valued at upwards of $100 million.

Shah’s message doesn’t really give us any hints as to what Google will be doing with Like.com but he alludes to the fact that he (and his team) will continue to work on visual search and cross-matching in e-commerce for the search giant.

The history behind Like.com and Google is complicated. In late 2005 Google was on the verge of acquiring a company called Riya, which was Shah’s first attempt at image facial recognition and tagging for consumers. Google eventually walked away from Riya.

In 2009, Riya was shut down, but the company had already refocused its efforts on ecommerce – using the Riya core technology to let people search visually by seeing images that are similar to other images. Like.com was born. And the company raised nearly $50 million in venture capital since 2006 and has revenue in the $50 million/year range.

From the product standpoint, Like.com operated its visual search engine and then went on to launch a number of smaller sites devotes to fashion and e-commerce. The company launched shopping personalization engine Covet.com; acquired street style social network Weardrobe, and rolled out visual styling tool Couturious. Most recently, Like.com launched a fashion Q&A site, What To Wear, which takes on a model similar to Q&A site Quora.

But there was a question as to what these verticals did for Like.com. The site’s traffic seemed to stagnate over the past few months. And the other sites in the family don’t have nearly as much traffic as Like.com

In the end, it seems like one thing stands clear. If at first you don’t succeed, try, try again.