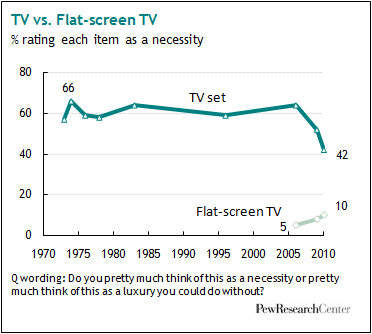 In the hierarchy of American Needs, the TV used to be paramount. But fewer and fewer Americans feel that they need a TV anymore. A headline-grabbing report from the Pew Research center titled “The Fading Glory of the Television and the Telephone” shows that more Americans surveyed say that they need their home computers (49 percent), cell phones (47 percent), and even microwave ovens (45 percent) than their TV sets (42 percent). The number of people who consider the TV to be an essential item dropped from 52 percent last year.

This is a stunning drop in a single year, and surely it shows that more people have their faces glued to their computer screens and cell phones, which is taking away from how they feel about their TVs. Except that is not what the data shows at all. The survey breaks out TV sets and flat screen TVs. Guess how many people consider a flat screen TV essential? It is 10 percent, which when you combine it with the regular TV sets, brings you back to 52 percent.

Only 5 percent of people said that they absolutely need a flat screen TV last year. So the total combined need for TVs still went down a bit (by 5 percent), but it is not quite as dramatic as the headline would lead you to believe. That’s about the same difference as the amount of people who no longer say the need a landline phone, which dropped 6 points last year to 62 percent.

And what product do Americans say they need the most? The good old American car, of course, with 86 percent saying so (but even that is down by 2 points). 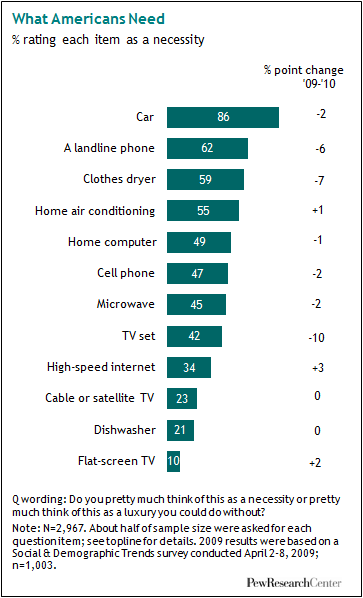