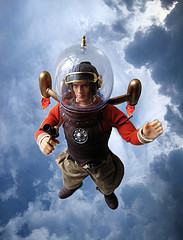 A little more than a year ago, I was in London at a dinner party and my friend Matt Ogle was glued to his phone, hanging on every update he could find about an impending shuttle launch. Given it was a room full of entrepreneurs and techies, no one was too offended that anyone was glued to his or her phone—but we were all mocking him about his somewhat dated NASA obsession. And Matt said, “Yeah, I get that a lot. I can’t help it, I still like space.”

What happened to our love affair with astronauts? When I was a kid Space Camp was the big movie, my brothers and I watched Star Trek every week, NASA was one of the few field trips my school would travel to go on, and I always bragged to friends that my uncle was actually a rocket scientist. The only thing better would have been if he were an astronaut—that was just the height of “WOW!” Watching the Challenger explode was my generation’s equivalent of the Kennedy assassination—we all remember exactly where we were when we heard the news. (For me, it was crowded in Mrs. Brundige’s room where the only TV in school was.)

But somewhere along the way, we’ve fallen out of love with space. President Barack Obama clearly telegraphed this through his decision to cut the latest mission to the moon, and movies and TV shows – with notable exceptions like Battlestar Galactica and Avatar—have become more about reality, whether American Idol-style competitions or gritty cop dramas. The closest we get to glorifying science on TV these days is CSI. No kids I know dream of growing up to be astronauts anymore. They want to be on TV, play sports or start an Internet company. Has Silicon Valley’s great high-tech boom of the last few decades killed the sex appeal of NASA by making technology more real and exciting here on earth?

Last Sunday, our guest on Press:Here was Pete Worden, head of NASA Ames Research Center, a facility just down the road from Google in Mountain View. The theme of the show was how Ames can work more with Silicon Valley—whether that’s playing a role in starting new companies, buying from them, or just winning the best employees away from high-growth startups.

It was a fascinating interview for me, and you can watch the whole thing here. I was a little irritated that Worden brushed off any questions about how he was attracting talent, denying it was a problem at all. I’m not convinced. But the most interesting part was talking about the increasingly public-private partnerships that NASA is being forced to embrace for its very survival. With funds cut, it can’t do all the research itself. Meanwhile, a generation of centi-millionaires and billionaires, including Jeff Bezos, Elon Musk and Richard Branson, who were reared on a passion for space are putting their own money behind programs that seemed audacious a decade ago, but are turning into billion-dollar companies today.

The idea that space could be a serious growth opportunity for Silicon Valley was laughable ten years ago. But while rockets aren’t a mass market—they’re a lucrative one. Ask Musk who got a $2 billion contract from NASA for SpaceX. Are we really on the cusp of settling the galaxy and will the same people who settled the virtual world be the ones who take us there? Worden thinks that idea isn’t such a joke anymore.

If this new world is possible there are a million questions. We’re basically talking about colonizing space and last time a group of nations decided to “carve up” a new world, there were a lot of political, environmental and economic implications with which countries in South America, Africa, and South East Asia are still grappling. Will we do better with space? A few decades from now, will Avatar turn out to be prescient rather than allegorical? Is this still a US push into space or more of an international coalition? How far off is retiring on Mars, for real? Is it possible that something as, well, retro as space travel could be the next big Valley growth area, not clean tech?

We get some of these answers out of Worden in the clip below; but for the rest, we’ll just have to wait and see.