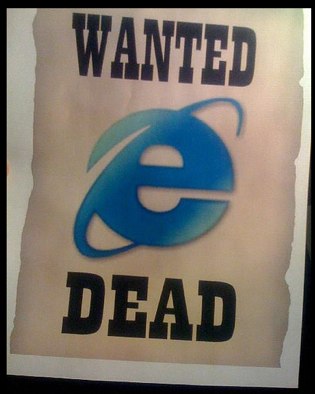 In 1997 Wired Magazine declared the browser dead. “Sure, we’ll always have Web pages. We still have postcards and telegrams, don’t we?” said Kevin Kelly and Gary Wolf.

They were wrong, of course. The browser is still the killer app of killer apps. It’s the single most important way that we interact with the Internet. From Wikipedia to webmail to YouTube, it’s the universal virtual machine that has made pc operating systems irrelevant. If all you have is a browser, you’ll be just fine.

Fast forward to today and Wired is once again saying the browser is dead. “Over the past few years, one of the most important shifts in the digital world has been the move from the wide-open Web to semiclosed platforms that use the Internet for transport but not the browser for display,” says Chris Anderson.

And about that 1997 article: They weren’t wrong, they were prescient. “The point was altogether prescient,” Anderson says now of that article. Overheard on the TechCrunch Yammer stream: “Possibly the greatest explanation for being dead fucking wrong that I’ve ever seen.”

The new article is based on a foundation of data supplied by Cisco that shows web traffic, as taking a smaller piece of total Internet traffic. The chart itself is misleading, as BoingBoing pointed out. But even taken at face value, it’s still wrong.

Wired’s argument, based on the data, is that the browser is dead and apps, like iPhone apps, are taking over. “This is not a trivial distinction. Over the past few years, one of the most important shifts in the digital world has been the move from the wide-open Web to semiclosed platforms that use the Internet for transport but not the browser for display.”

Um, ok. But the data doesn’t show this at all. Sure, video traffic is expanding. Which makes sense because it’s a heavy load. But most of it is also being transported via Flash and HTML right through a web browser. And most app data is counted under “web” in Wired’s graph, meaning its all lumped together with normal browser data.

In other words, Wired took a misleading graph and then drew all kinds of conclusions based on it that don’t even make sense in their make believe world. It’s like they showed a picture of a banana and said it explains the rising cost of gasoline.

In fact, the only thing Wired’s chart really shows is that video files are really big, and people like to watch them in browsers.

The browser isn’t dead. Web pages aren’t dead. HTML works really, really well. Check out Facebook’s iPad “app,” for example. You don’t download it from an app store, you just point your browser to touch.facebook.com. Not only does it work really well, Steve Jobs doesn’t get to have a veto right over people using it. It’s no wonder that we’re seeing a surge of traffic from the iPad to our site, via a browser.

Apps are great on mobile phones with small screens. But they are a pain to install and keep synchronized. Eventually having less local software will make sense on phones, too. All you really need is that browser virtual machine and you can pull everything else from the cloud. This is obvious. Only a bunch of hipster tech journalists checking email on their iPads all day* would think otherwise, and then make up a bunch of data to support their argument.