On Friday Twitter started a mass roll out of its “Followed By” and “You Both Follow” features, which we covered in more detail in June (It seems as though Tlists, a feature which allows users to see what Twitter lists you are on, have yet to launch full force).

While Facebook and Foursquare have had “friends in common” social graph features for awhile, it’s been more difficult to directly convert these concepts to Twitter because the concept of “friend” v.s. “follower”/”followed” is hard to parse.

But, after playing with the new features for a couple of days, they have proven to be incredibly useful. They’re as or if not more useful and definitely more grammatically correct than “Who To Follow. And they’re especially more useful than Facebook’s “Mutual Friends,” despite the fact that Twitter allows for one-way relationships whereas Facebook is by design two-way, where both parties have to agree on the relationship to connect. 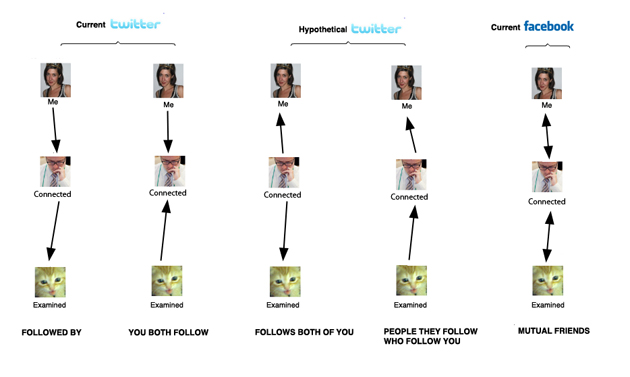 Mapped out on the above chart, the “Followed By” feature shows you which of your friends (labeled as “Connected”) is following a user. Implicit in this feature is the fact that following someone is the equivalent to an endorsement, which makes it valuable to see which other people you follow have “endorsed” the person you are currently examining. In the case of @meowmeowbeat (the user I’m considering following or “Examined” in this exercise) it’s @parislemon, who I know to be a stand up guy.  Maybe he’s onto something?

Thus is also the case with the  “You Both Follow’ feature. If you’ve landed on the Twitter profile of someone whom you’re evaluating whether to give credence, a delineation of their taste in people, or who they have endorsed that you have also endorsed might be the tipping point as to whether or not you should follow. @meowmeowbeat seems to be well connected in the tech reporting community, so the account is probably worth a follow in my case.

The infinite chains of possible one way connections leaves Twitter with the leeway to launch many more features based on their complex directed social graph, hence the hypotheticals above. While someone who “Follows Both Of You” might just be a spammer, the “People They Follow Who Follow You” connections might be a lot more telling about a user’s social caché. In any case, a user which you have deigned worthy of polluting your Twitter stream (whether or not they follow you back) may say a lot more about you then the fact that you’ve accepted your junior high lab partner’s friend request on Facebook. Would you follow that same person on Twitter?

Because of an inordinate amount of friend requests accepted from old college roommates and (at least for me) social media consultants, people seem to care more about who follows them on Twitter than who they’re friends with on Facebook. And Twitter’s decision to roll out these displays of a more intricate Twitter social graph is leading to better connections. Facebook’s “Mutual Friends” on the other hand now looks somewhat limited, in Twitter social graph terminology the degrees of separation of a mutual friend on Facebook would be, “Person who you follow, who follows you back, who also has this same follow/follow back relationship with the person you’re currently looking at.”