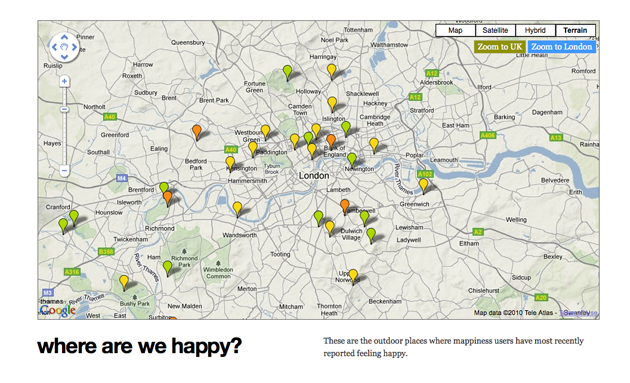 Officially launching today is Mappiness, a UK iPhone app that “maps Happiness” by pinging users with a survey in order to plot out their feelings during the day (happiness, in this case, is apparently user-defined).

Using LBS, the app links responses and response locations to environmental data in an attempt to, according to lead researcher George MacKerron, “better find answers on the impacts of natural beauty and environmental problems on individual and national well being.”

MacKerron, based at the London School Economics, elaborated on the idea of tracking happiness, “In the 19th century economists imagined a ‘hedonometer,’ a perfect happiness gauge, and psychologists have more recently run small scale ‘experience sampling’ studies to see how mood varies with activity, time of day and so on.”

Mappiness is the first project of its kind to add location to the mix. Because the iPhone allows users to carry the technology with them, researchers can now randomly hit test subjects up with questions like how ‘happy,’ how ‘relaxed’ and how ‘awake’ they feel on a sliding scale. There is also the option of uploading photos, which is pretty nifty for a research study.

You can find all the Mappiness data in aggregate here including a happiness index chart, and a photo-map of the happiest locations in the UK, as well as real-time happiness meters.

Future app features such as users having the ability to download all their own data as spreadsheets and Google Earth files are also planned. Researchers have already recruited 533 people to the project and are shooting for 3000 ideally. And while non-UK iPhone owners might be left out of the mapping part, the app will still chart your personal happiness fluctuations. And a US-based app may be in the works.

Says MacKerron, “The question is about how you feel ‘nowadays’ and in general — and how people remember their happiness, and how they actually experience it, are two quite different things.”

Now, thanks to the iPhone, we might get a better grasp on humanity’s happiness habits. 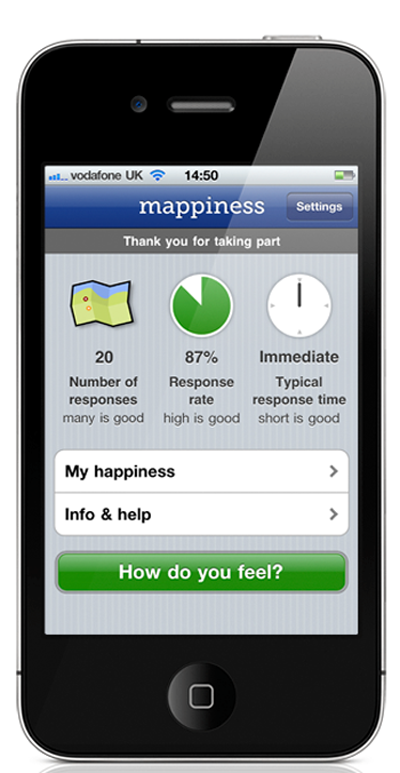 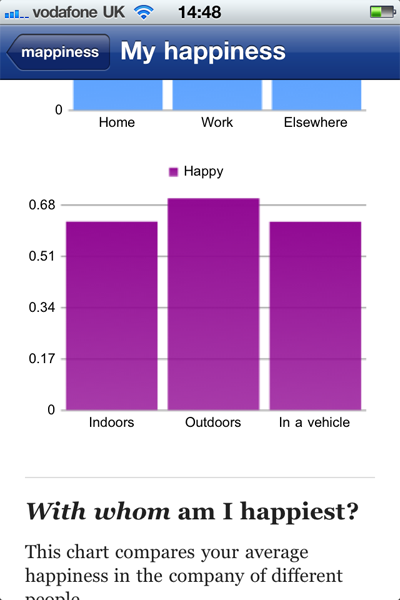