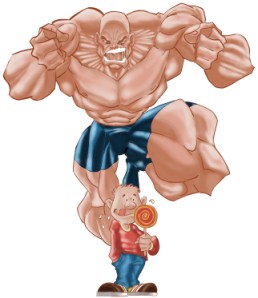 I knew I would be touching a raw nerve with my last two posts, on patents. But I was really surprised at the divergence of opinion. Entrepreneurs overwhelmingly supported my stance that software patents hamper innovation and need to be abolished, but friends at Microsoft, IBM, and Google were outraged at my recommendation. The big companies’ executives argued that abolishing patents would hurt their ability to innovate and thus hamper the nation’s economic growth. (They believe that companies like theirs create the majority of jobs and innovations, and they claim that without patents they cannot defend their innovations.) I am not convinced that software patents give Google any advantage over Microsoft and Yahoo, or make IBM’s databases any better than Oracle’s. But I do know one thing for sure: it isn’t the big companies that create the jobs or the revolutionary technology innovations: it is startups. So if we need to pick sides, I vote for the startups.

Let’s start with the question of who creates the jobs. This is one of the issues that I recently took Intel co-founder Andy Grove to task for, in BusinessWeek. Grove wrote a profound essay lamenting the loss of American manufacturing jobs. I share his concerns about jobs. But Andy’s protectionist recommendations for restoring America’s competitiveness were largely based on his flawed premise that companies like Intel create all the jobs—not the startups. I also discussed the tradeoff between bailing out companies like General Motors, AIG, and Citibank and nurturing startups in this BusinessWeek piece.  This question is more important than it may seem. 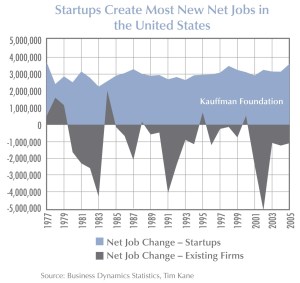 Kauffman Foundation has done extensive research on job creation. Kauffman Senior Fellow Tim Kane analyzed a new data set from the U.S. government, called Business Dynamics Statistics, which provides details about the age and employment of businesses started in the U.S. since 1977.  What this showed was that startups aren’t just an important contributor to job growth: they’re the only thing. Without startups, there would be no net job growth in the U.S. economy. From 1977 to 2005, existing companies were net job destroyers, losing 1 million net jobs per year. In contrast, new businesses in their first year added an average of 3 million jobs annually. 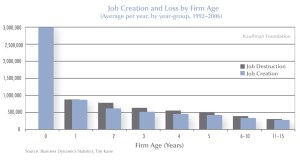 When analyzed by company age, the data are even more startling. Gross job creation at startups averaged more than 3 million jobs per year during 1992–2005, four times as high as any other yearly age group. Existing firms in all year groups have gross job losses that are larger than gross job gains.

Half of the startups go out of business within five years; but overall they are still the ones that lead the charge in employment creation. Kauffman Foundation analyzed the average employment of all firms as they age from year zero (birth) to year five. When a given cohort of startups reaches age five, its employment level is 80 percent of what it was when it began. In 2000, for example, startups created 3,099,639 jobs. By 2005, the surviving firms had a total employment of 2,412,410, or about 78 percent of the number of jobs that existed when these firms were born.

So we can’t count on the Intels or Microsofts to create employment: we need the entrepreneurs. And there is an important lesson here for the states and cities that offer huge incentives to companies like Dell, Google, and Intel to locate their operations there. The regions should, instead, be focusing on creating more startups, not providing life support to technology behemoths.

Now let’s talk about innovation. Apple is the poster child for tech innovation; it releases one groundbreaking product after another. But let’s get beyond Apple. I challenge you to name another tech company that innovates like Apple—with game-changing technologies like the iPod, iTunes, iPhone, and iPad.  Google certainly doesn’t fit the bill—after its original search engine and ad platform, it hasn’t invented anything earth shattering. Yes, Google did develop a nice email system and some mapping software, but these were incremental innovations. For that matter, what earth-shattering products have IBM, HP, Microsoft, Oracle, or Cisco produced in recent times? These companies constantly acquire startups and take advantage of their own size and distribution channels to scale up the innovations they have purchased. They let the startups take the risk and prove the business models.

This raises an interesting question. Google and Microsoft have always prided themselves for hiring the cream of the crop of software developers. It is ridiculously hard to get a job at either company. But when technology’s top guns join these companies, they seem to make a smaller impact than those that don’t get hired. So would these companies be better served by releasing their most brilliant developers into the wild and arming them with seed financing to start companies? (They could negotiate partial ownership and right of first refusal on acquisition.) We would certainly get more innovation this way.

Simply put, if we are serious about lifting the economy out of its rut, we need to focus all of our energy on helping entrepreneurs. Provide them with the incentives (tax breaks and seed financing); education; and infrastructure. And gear public policy—like patent-protection laws—toward the startups. Let’s not bet on the companies that are too big to fail or too clumsy to innovate.