Appbistro, a marketplace for Facebook tabs that businesses, bands, and brands can use to add functionality to their Facebook pages, has just scored some angel funding. The company has raised a $550,000 convertible note led by Sand Hill Angels, with participation from Alfred Lin (TellMe, Zappos, Sequoia) Dave McClure’s 500 Startups, i/o Ventures, Zelkova Ventures, Seraph Group, Erik Moore, and Thomas McInerney.

Appbistro launched in May at TechCrunch Disrupt. The startup offers a directory of tab applications for sprucing up Facebook Pages, with apps for quizzes, signup forms, contests, multimedia, and a broad range of other categories. Each app listing includes a link to install that app on your Facebook Page, as well as supplementary reviews and screenshots.

Appbistro also has a payments system, allowing developers to charge users for premium tab applications (something they can’t do through Facebook itself). Cofounder Ryan Merket says that there are over fifty apps on the marketplace right now, and that he expects that number to nearly double in the next few weeks. Wildfire, a popular promotion building platform, is on board, and more partnerships with established Facebook developers are in the works.

10,000 applications have been installed to Facebook Pages using Appbistro, but most of them have been free so far. Merket says that the company will be using the money to hire more engineers, and also to optimize the service for paid applications. 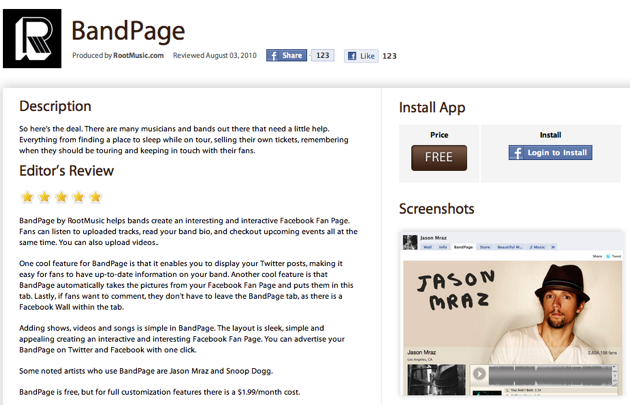