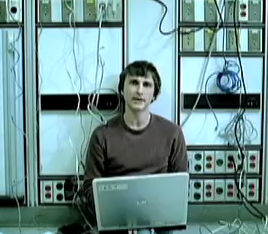 “The new Internet. If AT&T and Verizon have their way.”

That was the final warning in a public service announcement that ran on television in the run up to the Internet Freedom Preservation Act of 2007. Guess who made that video? Google.

That’s striking, of course, because of the news this week that Google has now compromised with Verizon on a proposed net neutrality plan. Google says the compromises made were necessary to move the debate forward. If you read my post last night, obviously, I disagree. And so does much of the rest of the web, it seems. Judging from this video, 2006 Google would disagree too.

Who besides Google and Verizon do agree on this compromise? AT&T.

Earlier today, we were pointed to a new site made in protest of the Google/Verizon plan. This site is appropriately named Voogle Wireless. Apparently, this site was made by someone who helped produce the 2006 PSA for Google and is now pissed off at the blatant hypocrisy.

Watch the video below:

Further, here’s the note Google CEO Eric Schmidt also wrote in 2006 leading up to the act (which was co-sponosored by then-Senator Barack Obama, by the way):

A Note to Google Users on Net Neutrality:

The Internet as we know it is facing a serious threat. There’s a debate heating up in Washington, DC on something called “net neutrality” – and it’s a debate that’s so important Google is asking you to get involved. We’re asking you to take action to protect Internet freedom.

In the next few days, the House of Representatives is going to vote on a bill that would fundamentally alter the Internet. That bill, and one that may come up for a key vote in the Senate in the next few weeks, would give the big phone and cable companies the power to pick and choose what you will be able to see and do on the Internet.

Today the Internet is an information highway where anybody – no matter how large or small, how traditional or unconventional – has equal access. But the phone and cable monopolies, who control almost all Internet access, want the power to choose who gets access to high-speed lanes and whose content gets seen first and fastest. They want to build a two-tiered system and block the on-ramps for those who can’t pay.

Creativity, innovation and a free and open marketplace are all at stake in this fight. Please call your representative (202-224-3121) and let your voice be heard.

Thanks for your time, your concern and your support.