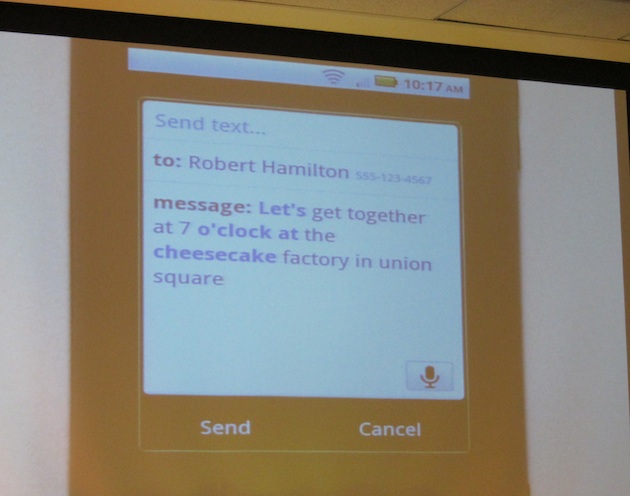 Today at Google’s office in San Francisco, the mobile team took the stage to unveil a couple new products. Hugo Barra, Google’s director of product management for mobile kicked off things by noting that we’re entering the mobile supercomputing era. What he means by this is that thanks to computation in the cloud, modern mobile devices are actually more like supercomputers.

The first new feature Google showed off was the ability to send text messages with your Android phone — using only your voice. This is a part of Google’s new Voice Action feature in their new version of the Voice Search application which is available starting today for Android phones. It’s awesome — but that’s not the only voice action, there are 12 of them (plus search) — and growing.

Also included is the ability to dictate email messages — and again, it actually works. Google showed this off in a live demo on stage.

Another cool one was the ability to set an alarm on your phone simply by speaking. Basically you can now control almost anything on Android devices with your voice. And, of course, there’s a “Note to self” feature — a way to give yourself vocal reminders (these are sent to your email so you remember them later).

Apple offers similar voice control features for the iPhone — but it’s extremely limited compared to this. For example, that is all based on information you have on your phone. Google’s solution is basically anything they index on the web AND whatever is on your phone.

This feature comes pre-installed on the new Droid 2 phones, we’re told. Sadly, this is only available for Android 2.2 and later. And these voice actions are only available in U.S. English for now. Google promises other languages will be coming shortly.

See more in the video below: