List making platform Ranker has officially left beta after 10 months, with today’s launch of the Community Lists feature. A service for “ranking anything in the universe,” Ranker has a database of over 6 million items for list inclusion, with over 10,000 lists being created during Ranker’s beta. The site now has over 500k monthly unique visitors and hopes that will grow exponentially after today’s launch.

Ranker’s “wisdom of crowds” feature allows users to contribute to aggregate lists and see how their opinions stack rank on any topic, in realtime. While the current most popular community list is unsurprisingly “The Best TV Programs of Recent Memory” and of course “The Hottest Celebrities,” founder Clark Benson’s eventual goal is to dominate with product related lists i.e. “Top 10 Digital Cameras.”

Benson is also working on making the Ranker interface cleaner (some of the community features were difficult to suss out) as well as offering a portable version of Community Lists that can be deployed on third party sites. While Ranker currently monetizes via ads and affiliate ecommerce, a platform play is next um, on the list. 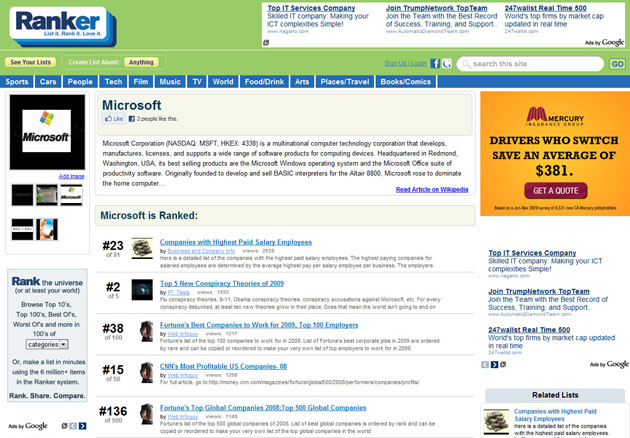