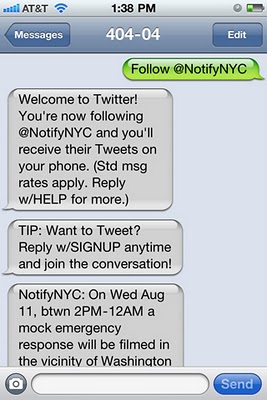 It’s often overlooked now, but the origin of Twitter’s 140-character limit was so that tweets could fit into SMS messages (which have a 160 character limit — room is needed for usernames). Today, Twitter has a new feature that returns them to their SMS roots: Fast Follow.

It’s a simple idea, really. By way of SMS on any phone in the United States, you can get alerts from anyone on Twitter. This is true even if you don’t have a Twitter account. All you have to do is text “follow TWITTERNAME” to Twitter’s shortcode, 40404, and you will start getting realtime updates.

This is yet another good idea from Twitter to get people trying out the service. For example, if you see a Twitter name being promoted at a restaurant, you could Fast Follow it via SMS and see what it’s all about.

Obviously, Twitter believes people who do this will start to understand the power of the service and will then want to sign up. As such, they’ve created a simple way to do that too via SMS — simply reply to any tweet you get with “SIGNUP”.

You can also easily turn the tweets off and on by simply sending “off” and “on” back to the 40404 number.

This feature is currently only available in the U.S., but Twitter says it’s working to get it up and running in other countries as well. Given the importance of SMS in countries where smartphones are less prevalent, this could be an even more important feature overseas.