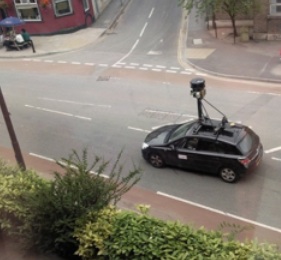 Google cannot contain its legal problems surrounding the inadvertent collection of personal data from WiFi networks by ots global fleet of Street View cars. Earlier today, police in South Korea raided Google’s offices there to confiscate computers storing data collected from Street View cars in that country. This action follows similar investigations in France, Germany, the UK (where Google was cleared), and a multi-state investigation in the U.S.

Google was preparing to launch Street View in Korea and had deployed a fleet of vehicles equipped with cameras and WiFi-sniffing technology to collect street-level images for Google Maps. The cars use fixed Wifi networks to help determine their location, but these cars have been found to be collecting personal payload data as well. In the past, Google has explained that this data collection was “a mistake” stemming from the inclusion of some experimental code from a previous WiFi project.

Google stated last May that it grounded its Street View fleet once it discovered this problem to strip out the personal data and, presumably, the bad code. It is not clear whether Google forgot to strip the code in Korea, or the Korean authorities are reacting to the news from May and investigating data collected before then. But that one piece of code is proving to be a huge liability for Google.