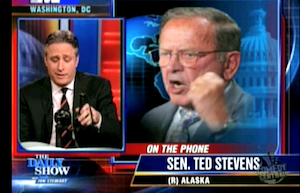 In an odd bit of timing, news is breaking that former United States Senator Ted Stevens was on board a plane that crashed in his native Alaska last night. A former aide stated earlier that Stevens passed away in the crash, but Stevens’ family has yet to comment. Stevens was the longest-serving Republican Senator in history, serving from 1968 until 2009. He was known for a number of key legislation that helped his state of Alaska grow and prosper, and also for his role in helping to establish the United States Olympic Committee. And then of course there was his controversial re-election campaign in 2008 — which was carried out while he was under indictment by a federal grand jury for ethics violations. Though he was found guilty, the charges were later dropped — but not until after he lost his re-election bid.

But around the Internet, Stevens is best known for the meme he helped create: “series of tubes.” I note that the timing of Stevens’ plane crash is odd because that phrase Stevens coined was done so in the context of net neutrality — a subject which is obviously very much in the news today due to the Google/Verizon dealings. Stevens was actually the Chairman of the Senate Commerce Committee which was debating the issue in 2006. At that time, he gave an 11 minute speech about the topic that compared the Internet to a “series of tubes.” The rest is history.

Ten movies streaming across that, that Internet, and what happens to your own personal Internet? I just the other day got…an Internet was sent by my staff at 10 o’clock in the morning on Friday. I got it yesterday [Tuesday]. Why? Because it got tangled up with all these things going on the Internet commercially.

[…] They want to deliver vast amounts of information over the Internet. And again, the Internet is not something that you just dump something on. It’s not a big truck. It’s a series of tubes. And if you don’t understand, those tubes can be filled and if they are filled, when you put your message in, it gets in line and it’s going to be delayed by anyone that puts into that tube enormous amounts of material, enormous amounts of material.

Soon we had dance remixes on YouTube, and it became a go-to gag for Jon Stewart on the Daily Show. Incidentally, Google has even poked fun at the statement a few times — notably, an older version of the Chrome web browser would launch a tubes screen saver or a gray page stating “The Tubes are Clogged” if you entered “about: internets” into the address bar.

“Ted Stevens” is currently the top Trending Topic on Twitter, with about half the tweets noting his “series of tubes” comment. The meme will go on.

Our deepest sympathies go out to Stevens’ family in this difficult time. Hopefully they understand that the Internet had a soft spot for the Senator, despite his stance on net neutrality — even Google and Verizon seem to have a hard time understanding it, judging from their actions the past few days.

Update: Other sources are now confirming that Stevens passed away in the crash. He was 86 years old.