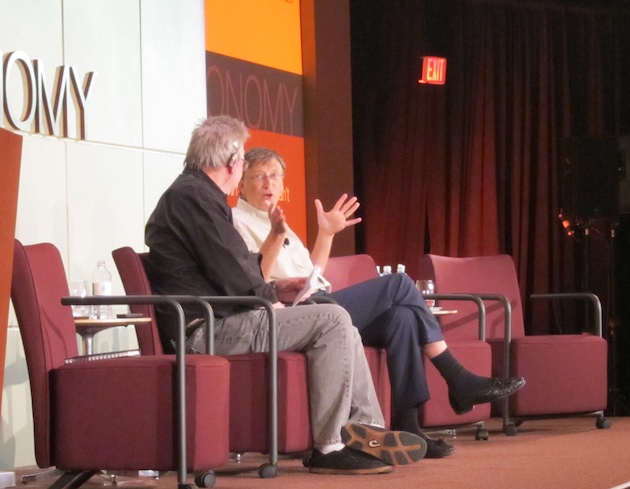 To wrap up the Techonomy conference in Lake Tahoe, CA, Bill Gates took the stage to talk with host Brent Schiender. A big idea of the conference was the future of technology, especially as it related to the economy. Gates talked a lot about that, but perhaps in a way you wouldn’t imagine. His mind was in the gutter. Literally.

“Latrines are fascinating,” Gates said. The way he said it was in a bit of a joking manner, but he’s not kidding. He talked about how many books he reads on the subject these days. “No one wants to read about it — it’s one of the greatest under-investments,” Gates said.

“We’re gonna have a breakthrough in the latrines,” he continued. He said that while the flushable toilet is the gold standard, it isn’t efficient at all. Someone is going to fix that, according to Gates.

So what books is he reading on the subject? He named a few. One was Water and Sanitation. “It’s quite lurid,” Gates joked. “It’s a super-important topic,” Gates reiterated. “You can visit poor-world latrines and learn from that as well,” Gates joked.

Gates really does think about this topic a lot. Later in the conversation, he returned to it when talking about investing in certain types of education. “When it comes to things like investing in new toilets, not much money goes into that,” Gates said.

“You end up with the low IQ guy on the toilets.”