Women 2.0 Labs, a 5-week crash course in entrepreneurship, is somewhat of a misnomer.

Although it is indeed a lab where professionals work in teams of four to develop a startup (or at least the prototype of a startup), it is far from a women’s only club. Of the 20 participants, 65% are female and 35% are male— an eclectic collection of engineers, designers, marketing professionals, and recent graduates.

The goal of Women 2.0 is to promote a new reality, where women voices are not isolated or merely highlighted but seamlessly integrated into the fabric of Silicon Valley entrepreneurship.

“Real innovation comes from diversity – diversity of experience, of context, of vision. Gender diversity and even ethnic diversity opens up a creative environment for innovation and different ways of thinking to emerge,” says co-founder of Women 2.0, Shaherose Charania.  “We want[ed] to create realistic scenarios – if a women goes out in the world today to meet her future founder, she’ll likely work with a man and that’s reality since less than 5% of women are founders of tech companies. We aren’t afraid of it, we embrace it.”

Although the ultimate mission of Women 2.0 is gender-focused, gender identity took a backseat during the 5-week program, which culminates in a demo event tonight at True Ventures’ San Francisco headquarters. Over the course of the program, participants formed teams, turned ideas into potentially viable startups, worked with industry advisors and extensively tested their product by conducting hundreds of surveys, consumer reviews.

While the participants were chosen based on their diverse backgrounds, they are virtually all full-time professionals who are moonlighting as entrepreneurs-to-be. The few who are not in that bucket are generally professionals in transition or recent graduates— like Priya Sheth, co-founder of team GeoSquish, who until recently was an aerospace engineer and is now pursuing a career in user interface design. To accommodate people’s full-time schedules, the teams met on weekends and week days at True Ventures offices from 6 to 9 pm and organized mini-demos on Thursday nights for visting advisors (like Steve Blank, Eric Ries, Dave McClure and Ann Muira-Koo).

“What really is important is what happens after the program, do the teams stick together, has the idea changed, has the idea pivoted in any way, most likely yes,” Charania says. “Of course not all of them, 5 week is a crash course, and that’s why we call it a pre-incubator, it’s not a full-fledged incubator we’re not taking equity…A lot of the people that came to the group they have a job, and they just have no one to ideate with, they have no one to actually build something with…It’s that community that’s the most important thing.”

On Wednesday night, we got a chance to talk to Charania and the founders at their ad-hoc workspace. For more on the program and a sneak peak at the startups, click on the video above. 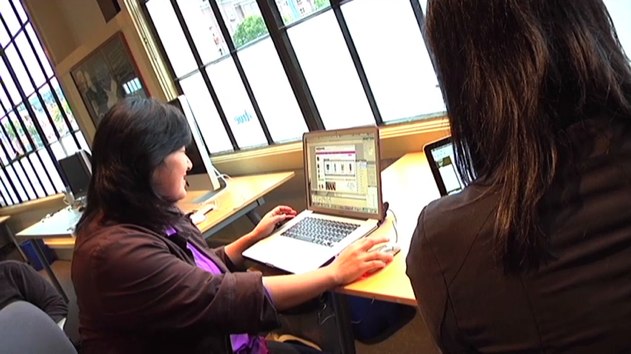