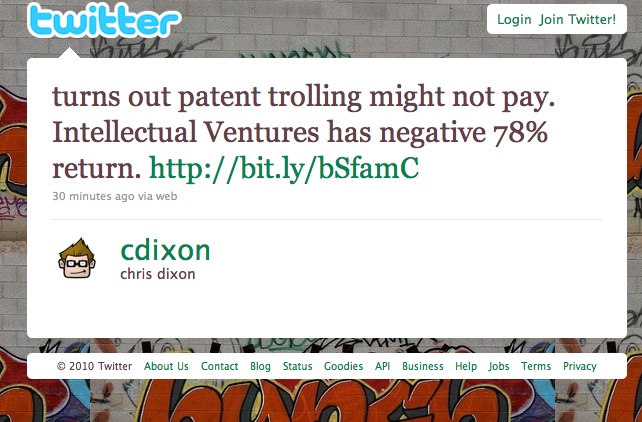 You can always count on Hunch founder Chris Dixon for interesting Tweets.  He just sent out this one:

turns out patent trolling might not pay. Intellectual Ventures has negative 78% return.http://bit.ly/bSfamC

The link is a PDf download of a document from the University of Texas Management Company listing all of its private investments in venture funds and private equity funds, along with their internal rates of return (IRR). One of the worst performers is Intellectual Ventures, the patent portfolio fund started by Nathan Myrhvold that has a reputation for patent extortion. One of its funds, the Invention Development Fund I, has a negative 73 percent IRR (Dixon mistakenly thought it was negative 78 percent, but close enough). Another fund, the Invention Investment Fund II, has a negative 10 percent return. The two funds combined are delivering a negative 36.66 percent IRR for the University of Texas.

These figures only show the returns to the University of Texas, which may have invested at the wrong time. They are from inception to May 31, 2010. The University of Texas invested a total of $28 million in those two funds, and may still get a return on its investment, but this glimpse into how Intellectual Ventures is doing for one of its limited partners suggests that at least those two funds are having trouble.

The University of Texas is doing better with some of its more traditional venture funds. For instance, its average return across seven Austin Venture funds is 28.76 percent, with Austin Ventures IV up 73.14 percent. According to the document, Union Square Ventures 2004 fund is up 48.37 percent. But there are some lackluster VC returns too. For instance, the IRR on Union Square Ventures 2008 so far is negative 15.75 percent and Integral Capital Partners is showing a lackluster 1.56 percent IRR. Again these numbers are admittedly only snapshot, but they are informative nonetheless.

The document is embedded below.