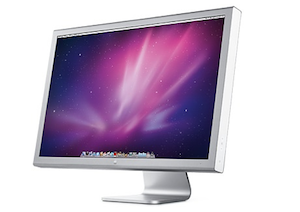 As you may have heard by now, Apple unveiled a whole range on new products today from new iMacs to new Mac Pros to a new Magic Trackpad product. Alongside those, Apple also unveiled a new 27-inch LED Cinema Display. I talked with Apple a bit this morning about the new products, and one thing that may not have been clear about the new monitor is that it will actually be the only one Apple offers going forward. Again, just this one 27-inch display.

Apple is discontinuing both the 24-inch LED Cinema Display as well as the older 30-inch Apple Cinema HD Displays they had been selling. When asked why, an Apple representative said this new 27-inch version was seen as “ideal for the uses we see most people having.” It was also noted that the 27-inch model features 60 percent more pixels than the 24-inch one, and because of its 16×9 ratio, it actually has the same number of pixels horizontally (2560) as the older 30-inch model (though slightly less vertically: 1600 versus 1440).

And at $999, the 27-inch Cinema Display is also only $100 more than the 24-inch was previously. Apple says that it will continue to sell the 24-inch model at a slightly discounted $799 price until supplies run out. Previously, the 30-inch Cinema HD Display was selling for $1,799 and that will continue until it runs out of stock as well.

This move to one model is actually a move back to the way Apple originally sold its first Cinema Displays. When they first went on sale in 1999, there was one 22-inch model. It wasn’t until 2002 that a second, 23-inch model was introduced, and the following year brought a new 20-inch model (while the original 22-inch was discontinued). In June 2004, the 30-inch model was unveiled — basically the same one now being laid to rest. That monitor was always a bit tricky because it required a Dual Link DVI capable graphics card. These new LED Cinema Displays only need a Mini Display Port input.

I asked Apple if the discontinuation of all other monitors meant we might see new, larger displays down the line. Specifically, I was wondering about the possibility that Apple could enter the HD television market. Not surprisingly, Apple wouldn’t comment on future roadmaps. For now, all we have in the 27-inch model.