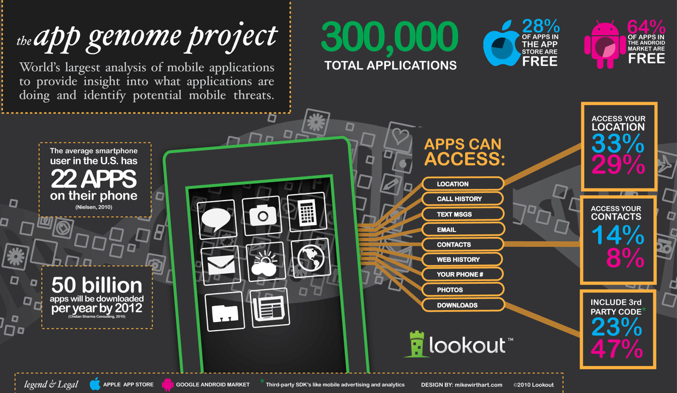 Lookout, a company that offers security data backup services for smartphones, is announcing the results of its App Genome Project, a continued effort to map and study mobile applications to identify security threats in the wild, and determine how apps are using users’ personal data.

Early findings show differences in the sensitive data that is typically accessed by Android and iPhone applications and a proliferation of third party code in applications across both platforms.

For example, results found that Android applications are generally less likely than iPhone apps to be capable of accessing a person’s contact list or retrieving their location, with 29% of free applications for Android having the ability to access a user’s location, compared to 33% of free applications on iPhone. Of course, this isn’t a huge difference, but again, this is early data.

Additionally, Lookout says that nearly twice as many free applications have the capability to access people’s contact data on iPhone (14%) as compared to Android (8%). The App Genome Project also found that a large proportion of applications contain third-party code, which is used generally for advertising or analytics. The project found that 47% of free Android apps included third-party code, while that number is just 23% on iPhone.

Lookout’s web-based, cloud-connected application indentifies and block threats on a consumer’s phone. Users simply download the software to a device, and it will act as a virus protector much like security software downloaded to a computer. Lookout, which just raised $11 million from Accel, Khosla and others, says the growth in smartphone adoption, mobile app downloads and increased consumer awareness of mobile security threats have helped make the offering a popular and necessary option for users.

For now Lookout, which is on more than 400 mobile networks in 170 countries and recently topped one million users, is only available for BlackBerry, Android and Windows Mobile devices. Lookout has over 80% of its users on Android and BlackBerry with the remaining users on Windows Mobile. And 70% of users are in the US.