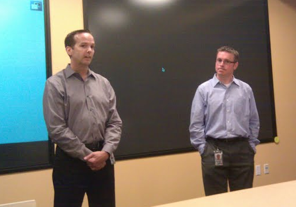 This morning at a special press event in Mountain View, Google announced Google Apps for Government, a new version of Google’s suite of cloud-based enterprise applications that have been hardened to meet the government’s more stringent security restrictions.

Dave Girouard, Google’s President of Enterprise, kicked off the presentation with a few stats: every year, the federal government spends $76 billion on IT expenses. Another $50 billion is spent on IT by state and local governments. Google is looking to help.

Google says that this is the first multi-tenant cloud application suite that has received FISMA certification at a FISMA-Moderate level, which gives it the ability to store and serve sensitive (but not classified) information. Google’s Matthew Glotzbach says this encompasses 80-90% of all government information.

The suite includes all of the normal Google Apps: Gmail, Talk, Calendar, Docs, Sites, Video, Groups, and Postini. To comply with government regulations, Google will be hosting App data on servers that are segregated from its common ‘cloud’ and are housed exclusively on US soil. Gmail and Google Calendar data is currently being stored on these special servers; Google says the other apps will follow.

Google CEO Eric Schmidt says that the enterprise software space is currently a sort of “open field”, as organizations look to finally turn away from the software architectures they’ve relied on for the last twenty years. In general, Schmidt says that everyone in government has the same problems: “it’s expensive and difficult to do things”. And he believes that web applications are well-suited for the vast majority of common tasks that the government has to manage, like distributing driver’s licenses, health care, and getting registered for Social Security.

Girouard also noted that the increased security measures that were implemented as part of the FISMA certification, which include more regular permissions checks, are being extended to standard Google Apps accounts as well.  It also sounds like Google is planning to offer businesses other governments the ability to choose where they’d like to physically store their data.  Glotzbach wouldn’t give a time frame for when this will happen (or even confirm that it will), but he says that it’s a request that Google frequently receives. In other words, it’s coming.

On a related note, Google says that the recently reported delays in Los Angeles and its migration to Google Apps are overblown and that while there have been “speed bumps” in the deployment, it’s going well in general with the apps deployed to over 10,000 users.