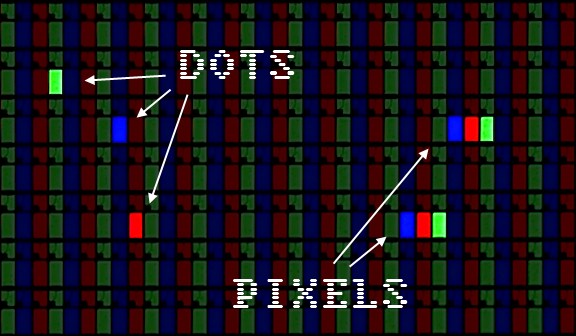 These days, when you go to look up the specs on a new camera or camcorder, one of the first things you check out is the LCD. But as often as not, you’ll be hit with an unfamiliar number: some huge quantity of “dots.” Most people aren’t familiar with this metric, as it is a slightly technical one — which is the reason it was chosen instead of the more common plain resolution numbers.

I decided to write up this short PSA in order to make this whole business a little more clear to the average camera-buyer.

Personally, I consider this practice misleading, like the usage of bits instead of bytes to rate consumer internet connections. The average person doesn’t know a bit from a byte (often doesn’t know a byte from Adam), so they have no way of actually understanding the numbers. More is simply better, though they’re not sure what they’re getting more of — and that’s just the way the internet and camera companies want it. They’re selling you an abstraction, and the less you know, the better for them.

The dots vs. pixels thing is a bit of a weird debate, because like Mbps and MBps, they are both valid measurements and sometimes both are necessary. In the majority of cases, though, camera makers are simply raising a smokescreen. It’s actually pretty simple: LCDs are made up of pixels, and pixels are made up of dots.

On most LCDs, there are three dots per pixel: one each of green, red, and blue. This is how it’s been for a long time, before pixels were really pixels and before LCDs were common. Some LCDs, however, in order to save space or increase effective pixel density, share dots between pixels, based on a different display model — you may hear this referred to as matrix or Pentile layout, but it’s comparatively rare, and low-cost LCDs like you see on most cameras are going to have 3 dots per pixel. 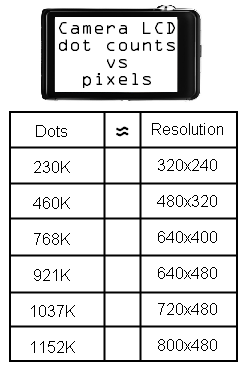 So when you see the dot count, a little math will set you right. Let’s say your camera advertises 460,000 dots or thereabouts. Divide that by three and you get around 153000 pixels. Now, resolutions generally come in multiples or divisors of 640. So try dividing by a few of those and round off to the nearest 10.

If you apply this method to a few more common dot counts, you get the little chart I made to the right, there. Sometimes the camera makers round off to one side or another, or state the exact number of dots — but generally they’ll be talking about the same resolution. But remember, this is a rule of thumb and there are exceptions in the form of different dot layouts and uncommon resolutions.

Much larger than those listed, and they’ll start using other names. A 1280×720 LCD panel won’t be advertised as having 2765K dots — they’ll just call it 720p, because that’s more marketable than obscuring the actual number with a dot count.

So, now you’re prepared. You can even figure out the PPI — if you feel like doing a little trigonometry. I don’t, so you’re on your own there.