Viral video monitoring startup PopScreen aims to save you from the disgrace you deserve when you email all your friends and relatives a link to that super funny video on YouTube only to find out they’ve all seen it a couple of times yesterday.

The company is today launching what they dub a ‘video prediction engine’, which they claim is capable of detecting which videos will spread across the Web before they actually do.

Its video prediction engine indexes around 15,000 videos per day based on those sources, and analyzes them in order to collect a number of unique data points – it’s unclear which ones exactly but the number runs in the ‘hundreds of thousands’ according to PopScreen – and processes them through a proprietary algorithm in an effort to accurately predict the viral potential of videos and to identify newsworthy content before your sister finds out about it.

Its main strength lies in filtering out duplicates, repeats and similar videos that are far less likely to scale up, tapping a network of influencers to determine which videos are most likely to go mainstream in the near future.

PopScreen says its engine will be rolled out on a larger scale over the coming months to allow partners across all industries including news, publishing, and search, to syndicate predictive data and provide their users with access to the most timely video content on the Web, tailored speciﬁcally to their personal interests.

Founded in 2008, PopScreen is privately-held and based in Houston, Texas. The startup was founded by Kevin Nguyen and Glenn Gutierrez, who in 2003 launched Zapmeta, a meta search engine which processed 25-35 million searches a month and self-reportedly generated over $15 million in revenue. 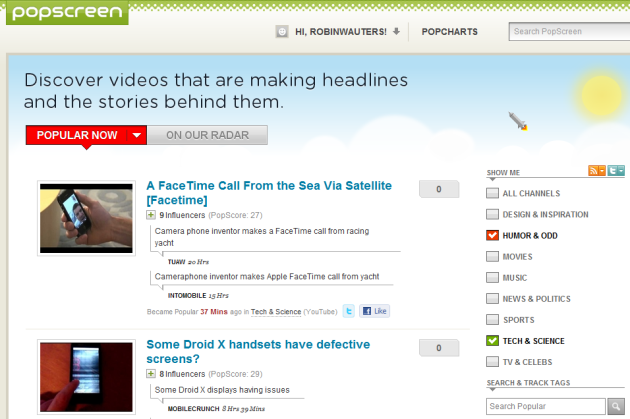