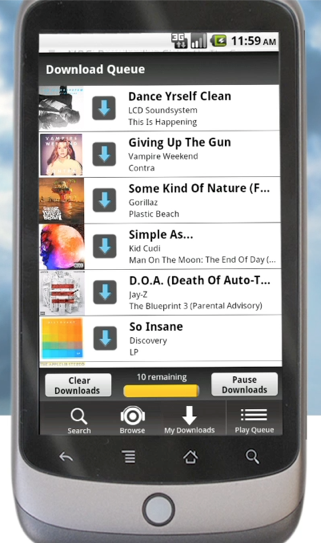 After months of waiting, it’s finally here. Streaming music service MOG has launched its mobile applications for Android and iPhone, giving subscribers unlimited access to its library of 8 million songs, which can be streamed or downloaded over both 3G and WiFi. If you listen to a lot of music, or just like being able to listen to music on-demand without having to sync to your PC, this is definitely worth checking out. Access to the mobile service costs $9.99 a month, but MOG is offering free 3-day trials when you download the apps (no credit card is required).

When MOG launched its All Access music service back in December, we gave it a rave review, but it was missing one key feature: mobile. These applications bring all of the functionality of the desktop service and they do it one better, by allowing you to store as many songs and albums as you’d like to your phone’s storage for offline access.

Navigating the application should come naturally to anyone who has used the iPhone’s music player (and it’s actually a big step up over the music player that comes stock on Android). After first firing up the app, the first feature you’ll want to try is search. You’ll find the regular options here, like searching by artist and song, but there’s also an option for Playlists, which allow you to search through user-curated playlists created by MOG’s large community of music fans. This is part of a recurring theme in the application: discovery, which is important if you’re keen on tapping into the service’s broad music library. The main navigation screen also includes a list of New Releases, top songs and albums across the service, and a collection of songs handpicked by MOG’s editors on a daily basis.

MOG really shines when it comes to actually getting the music you want to hear onto your phone. When you find a song or album you like, you have two options: you can stream it (just tap the song or album title), or you can download it and store it locally. Next to each song and album is an arrow pointing downward; hit that, and MOG will start downloading the files the background (it’s really nice to be able to download an entire album or playlist in one tap).

There isn’t any restriction on how much music you can download, other than the amount of storage you have available on your phone. By default downloads clock in at 64 kbps AAC+, but you can elect to download files at a much higher quality 320 kbps MP3 bitrate if you’d like (this obviously takes up more space).

You can also use MOG mobile to create custom digital radio stations, sort of like Pandora, but without the learning algorithms. Input a seed artist or song titles, and MOG will start playing similar music. Using a sliding scale, you can tell MOG to play only music by that artist, or you can increase the amount of variety you want to introduce into the station. 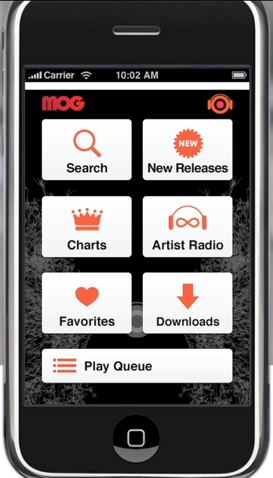 The applications have been a long time coming. MOG showed them off at SXSW in March, only to have its iPhone application sit in App Store limbo waiting for Apple’s approval for a month. Now that they’re out, you can expect MOG to push them hard, with help from the new $9.5 million funding round it raised earlier this year. Note that this release doesn’t include support for iOS 4’s multitasking; MOG says that it will be coming in the next two weeks in an update.

Of course, MOG isn’t alone in this space. The service will be competing against the likes of Rhapsody, and more competitors like Rdio and Spotify are on the horizon (the latter two have received plenty of press, but are not yet available in the US). Also note that MOG offers a version of its service that omits mobile access for $5 a month. Update: As the commenters point out, US users can request an invite code to Rdio from its site, but it’s still in private beta.