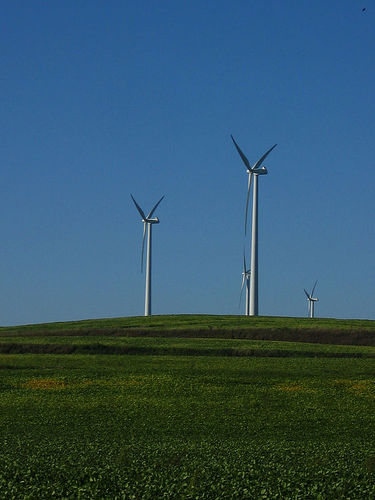 Google Energy today announced an agreement to purchase 114 megawatts of wind power capacity per year for 20 years at a set price from an Iowa wind farm owned and operated by NextEra Energy Resources.

A Google spokesperson Jamie Yood noted, “This is the first contract for Google Energy. We plan on exploring other opportunities to provide our data centers with environmentally friendly power [in 2010]. It isn’t limited to wind power.”

But the company isn’t planning to immediately use the wind power from the Iowa facility on its own operations.

Iowa is the second most wind power-generating state in the U.S. according to the American Wind Energy Association with existing power capacity of 3,670 megawatts and another 200 megawatts of capacity on the way. Texas leads with 9,505 megawatts in existing wind power generation capacity.

NextEra Energy Resources is the 18,000 megawatt power supply division — with 42% or 7,650 megawatts of that power from wind — of NextEra Energy, Inc., the Juno, Fla. energy company with revenue over $15 billion.

Overall, NextEra Energy employs more than 15,000 in 28 states and Canada, and has nearly 43,000 megawatts of generating capacity through wind, solar, hydro, natural gas, oil and nuclear.

Google also made significant investments in clean energy research and development projects, and startups — including AltaRock Energy, eSolar and AlertMe — through its “Renewable Energy Cheaper Than Coal” (or RE<C) and other philanthropic, partnership and venture capital efforts.

The search leader won the federal government’s approval to buy and sell energy as of February this year.

Now Google Energy allows it to: get electricity at favorable prices, lock in these prices over the long haul, use the power it buys for its own data centers and operations, and sell surplus energy to regional markets. Through this strategy, Yood says, “We’re partially protecting ourselves against future increases in power prices.”

Google also gathers RECs or renewable energy certificates along the way. In the laymen’s view, RECs are just like carbon offsets.

As the Environmental Protection Agency more stiffly defines them, RECs are sold independently of “physical electricity associated with a renewable-based generation source,” and “allow organizations to support renewable energy development and protect the environment when green power products are not locally available.”

Google could obtain RECs by just purchasing them from other companies who have invested in, or generated power from renewable sources. But then it wouldn’t have the operational advantage of predictably priced power.

Google Energy and NextEra Energy Resources declined to discuss the numbers behind the set pricing for their wind power deal.

But a NextEra Energy spokesman noted on Tue. “A long term commitment [by Google] to purchase a significant portion of the output from one of our wind projects is obviously a good thing for us.”

Google first established its goal of offsetting its own carbon footprint in 2007. This deal should bring it 114 megawatts per year closer to carbon neutrality.

Update: The total capacity of the particular Iowa wind farm from which Google is buying power is 150 megawatts. Of that, Google will be purchasing the power from 114 megawatts capacity. Jamie Yood of Google offered this detail: “Because the wind resource in this part of Iowa is amongst the best in the country, it is to early to tell what the long term performance will be. But wind farms in the region produce between 35% and 45% of nominal capacity, meaning [Google’s] purchase would represent between 350 million and 450 million kilowatt hours of renewable energy annually for twenty years.”