Businesses both big and small are flocking to social media platforms such as Twitter, Facebook, YouTube and Foursquare. The fact is that a presence on these platforms not only allows companies to engage in conversations with consumers, but also serves as an outlet to drive sales through deals and coupons.

And while major brands like Starbucks, Virgin, and Levi’s have been participating in the social web for some time now, the rate of adoption among small businesses is increasing too. According to a recent University of Maryland study, social media adoption by small businesses has doubled from 12% to 24% in the last year. But as these businesses look to Facebook and Twitter to connect with customers, many are finding that some strategies work and some do not produce results. We’ll be exploring these questions at a panel on Social Media and Businesses at our Social Currency CrunchUp on July 30. We’ve found some local and national businesses using social media effectively, ranging from Levi’s to a creme brulee cart, whose case studies are below.  Some of these businesses will be sharing their experiences at the CrunchUp (You can buy tickets to the CrunchUp here). 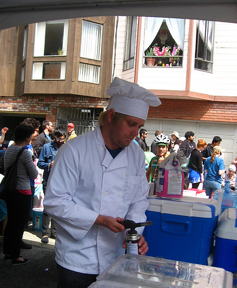 The Creme Brulee Man: Food from street carts have become a foodie favorite for San Franciscans. Food carts travel from neighborhood to neighborhood, offering their delicacies to a range of local foodies. But without a set location, how do these carts let consumers know where they will be? Well, through Twitter of course. Curtis Kimball, the man behind the enormously popular Creme Brulee Cart in San Francisco, has quickly amassed over 12,000 followers in a little over a year. He knows that most of his business comes from people who follow him on Twitter because Twitter is the only way you can find the cart’s location for the day, says Kimball, a former construction worker turned creme brulee expert. “It gives people a valid reason to follow me,” he says.

The other use of Twitter for Kimball is to tell people what flavor of creme brulee he is serving in a given day. And Kimball says that Twitter gives him the ability to develop a personal relationship with his followers and others. He says he tries to engage his followers by asking for suggestions of what type of custard to serve or where he should park his cart, and he always tries to keep things humorous.

Kimball says he has no marketing budget and Twitter has been a great way to amass fans. He doesn’t have as much of a presence on Facebook, and he’s not sure the model is as efficient as Twitter. “Twitter can absorb more than Facebook with very little effort,” Kimball adds. Yelp has also been a valuable source of referrals for the entrepreneur. The cart has 224 reviews and is rated with 4 and a half stars. 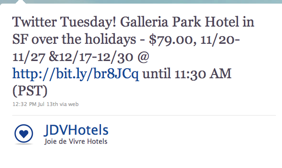 Joie De Vivre: Joie De Vivre, a company that operates 33 luxury hotels in California is using a variety of social media platforms to drive sales and marketing for its properties. Central to the hotel group’s strategy is disseminating deals and coupons to followers and fans on Facebook and Twitter. Every Tuesday, Joie De Vivre’s Twitter account will Tweet an exclusive deal to its nearly 10,000 followers. Followers have only hours to book the steeply discounted room rate. For example, this past Tuesday, it offered $79 rooms at the group’s Galleria Park Hotel in San Francisco in November and December. The company also operates similar deals for its 5,000-plus Facebook fans on Fridays.

In less than a year, Joie De Vivre has booked over 1,000 room nights through these types of deals—rooms that otherwise would have stayed empty.  The company has also started a partnership with coupons site Mobile Spinach to offer coupons for the group’s restaurants. And the company has partnered with Foursquare to offer deals for check-ins at its various restaurants. In terms of flash sales, Joir De Vivre has done a number of deals with travel sites like Gilt’s Jetsetter as well as RueLaLa, and Nadeau says these deals have done moderately well.

The company’s marketing VP Ann Nadeau tells me that because of the economy the hotel industry’s marketing budgets have shrunk, and social media efforts have proved to be a great way to both drive sales and build loyalty. The company’s social media efforts are not solely deal based. This summer, Joie De Vivre encouraged consumers to enter its Road Trippin’ California contest, which asked people to submit videos on YouTube that share why they love California. Three winners, out of 270 videos that were submitted, were selected to win all-expense California road trips with stays in the company’s hotels.

In terms of using social media for customer service, Nadeau says that each property hotel manager is responsible for monitoring conversations and reviews on Twitter, Facebook, and Yelp.

Stone Korean Kitchen: Co-founded last November by chef Terry Lin, and LinkedIn employees Robby Kwok and Dan Yoo, Stone Korean Kitchen aims to bring modern Korean cuisine to the Financial District in San Francisco. Yoo tells me that as soon as the restaurant launched, he started a presence on social media sites, including Twitter, Yelp, and Facebook. But the challenge of many small businesses with social media is driving traffic to the right social media channel rather than splitting it between various sites. Yoo says that interconnecting content between the various profiles has helped gain Twitter followers and Facebook fans. Currently the restaurant’s Twitter profile has 65 followers and its Facebook page has 107 fans.  Many of these are repeat customers.  For a small restaurant, it doesn’t take that many loyal customers to keep the kitchen busy. 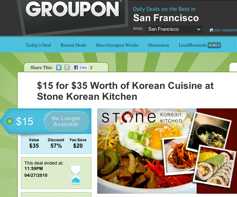 Yoo says that he consistently Tweets links to comments and reviews on the Facebook page. Of course, Yoo also stresses the importance of managing Yelp reviews and responding to customer complaints on social media platforms.

But what really tipped the scales for Yoo was Groupon (disclosure: my husband works for Groupon).  Yoo says that restaurant saw significant traction in both sales and traffic to its Yelp sites and Facebook page when the restaurant signed up for a Groupon deal in April. Stone Korean Kitchen sold 2600 groupons in one day, and saw a packed house for two months for both lunch and dinner. Now Yoo says that they see around 5 to 10 Groupons per day instead of 30 or 40 but the restaurant is still seeing a good number of repeat customers from the Groupon deal, says Yoo.

One effect of the Groupon deal, besides increased sales, was that there were a flux of Yelp reviews. It took the company six months to accumulate 80 reviews on Yelp and after the deal, the restaurant accumulated 90 reviews within three months. Yoo also says that he’s seen a steady increase in Foursquare check-ins following the Groupon deal.

Of course, since Yoo and Kwok are both LinkedIn employees (chef Lin manages the restaurant on a day-to-day basis), they put their heads together to figure out how they could use the professional social network to drive sales. With the ad targeting capabilities on LinkedIn, the restaurant started serving ads that target lawyers and bankers in the San Francisco area, as both industries are centralized in the financial district. They’ve noticed an increase in foot traffic and corporate catering requests as a result.  In the future, Yoo says that the restaurant is working on a promotion with Foursquare. And he is in talks with Twitter on featuring a deal on the social network’s new Earlybird venture.

Dr. Irena Vaksman, Dentist: Social media and dentistry don’t necessarily go hand in hand, but one San Francisco dentist has forged an impressive social media campaign to raise awareness of her recently launched practice. She has a Twitter profile, a Facebook page, a YouTube channel and an website. Dr. Vaksman’s husband, lawyer Robert Vaksman, has been the strategist behind her social media efforts. Robert says that his wife is confronted with the challenge of practicing in a building that houses hundreds of other dentists that have more established practices. He says that it’s a no brainer to be looking at as many social channels as possible for marketing efforts. 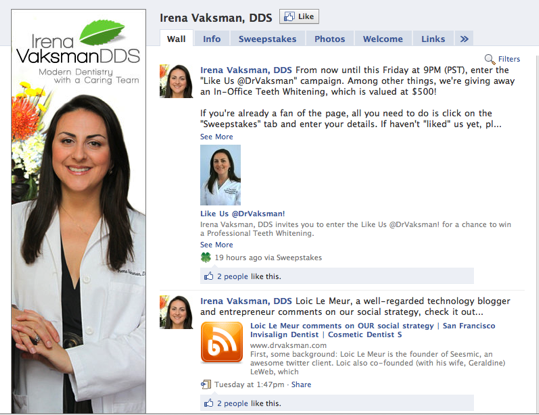 While the practice is still young, the Vaksmans say that they are starting to see patients and potential patients begin to communicate with them on the Facebook page, which has 70 fans. Vaksman will publish her Yelp reviews from patients on the site as well as YouTube videos containing educational content about dental procedures. Twitter is still a fairly new forum for the practice says Robert, and he’s still trying to determine the best way to engage with potential customers on the network.

Last October, Dr. Vaksman signed up for a Groupon deal in San Francisco, and received 320 new patients because of the deal, which was for a patient exam and x-ray. The Vaksmans say that the deal propelled the five month old business in the right direction and boosted its patient base significantly. Robert is also looking into partnering with Facebook campaign startup Wildfire to set up a promotional sweepstakes for the practice’s Facebook page.

Levi’s: Now more than ever, retail brands are engaging consumers on social networks to offer deals, allow users to socialize around purchases, and more. Levi’s Jeans was one of the brands that was first to use Facebook as a tool for sales and marketing initiatives and has launched a number of compelling campaigns using Facebook.

As one of Facebook’s initial partners using the social network’s new Like functionality, Levi’s allows Facebook users to like products on Levi’s online store and its Facebook page (which has nearly 500,000 likes) and share their favorite items with their friends. Within the first week, Levi’s got more than 4,000 likes, says Inside Facebook. 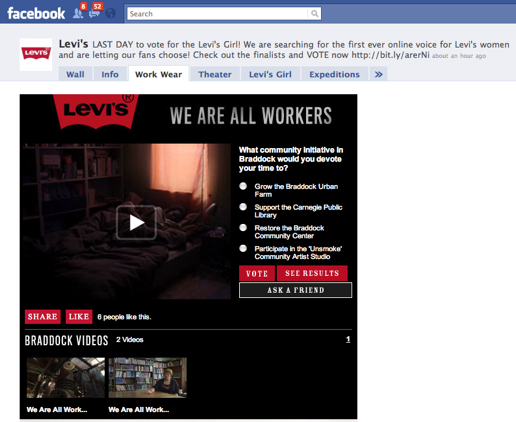 The jeans giant also promoted a major campaign in conjunction with SXSW this year, partnering with music publication The Fader to promote a music event at the festival. The company worked with brand marketing platform Involver to incorporate music and video into their page, with the hopes of driving music fans to buy jeans from the Levi’s brand. Most recently, Levi’s has begun to promote retail offerings with geo-targeted event advertisements on Facebook.

In terms of Twitter, Levi’s recently enlisted a “Levi’s Guy,” 23-year-old USC graduate Gareth, to engage consumers on the microblogging platform. He has over 6,000 followers and is responsible for responding to and engaging in conversations about the Levi’s brand on Twitter. The company is currently in the process of trying to find a Levi’s Girl, which will serve as a female foil to Gareth.

Levi’s director of digital marketing, Megan O’Connor, told us that the engagement with both Twitter and Facebook is about creating and informing brand ambassadors that will help drive sales through their own actions and word of mouth.

Starbucks: Most experts will agree that Starbucks has one of the best social media strategies out there.  Now that it is giving away free WiFi, it is even more of a magnet for roving laptop warriors.  And with 10 million Facebook fans, Starbucks is now close to surpassing the Facebook fan base of Lady Gaga. The company has held a number of promotions on its page to drive engagement. For example, Starbucks held a promotion for free pastries on its Facebook page, allowing customers to access a coupon that would give them a free pastry with a purchase of a coffee drink. Advertising on the social network has also helped to drive traffic to Starbucks’ page.

In terms of Twitter, Starbucks has also been incredibly active on the microblogging network, amassing nearly one million followers. Not only does the company’s Twitter stream serve as an engagement tool with customers who are talking about the brand on Twitter, but it is also used as a way to spread news from Starbucks. Starbucks has also participated in Twitter’s promoted Tweets program, which allows advertisers to buy sponsored links on Twitter.