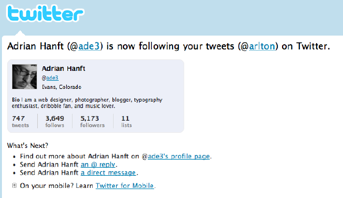 It looks like Twitter’s notification emails that are sent when you have a new follower are getting a much-needed makeover. A search on Twitter has confirmed that the new emails are being rolled out to users.

The new emails have a cleaner interface and now include the follower’s location and bio. This should help users easily detect if a follower is a spammer. You can also click to send an @reply to the follower or a direct message. In addition, you see if how many lists the follower is on. Clearly this information is much more useful than what Twitter was serving before.

We are assuming that this update is also going to be extended to direct message notifications as well. Twitter updated its email notifications last May, which also contained more information about the person sending you the message or following you. We noted at that time that these messages would be a lot more useful if they included bio info. Looks like Twitter took our advice.

As a few of our commenters are suggesting, it would also be useful to show users mutually following/followers.