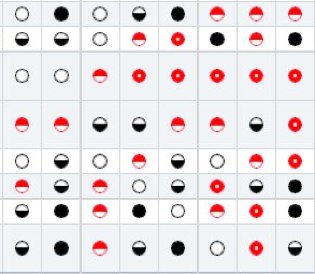 Sometimes I want to buy something like a blender or a car or a washing machine. And sometimes my wonderful and loving mother (her birthday is coming up) finds out because I accidentally tell her, or my dad does, or she uses that mom ESP thing that she used to find out I was hiding beer in my closet in high school.

Anyway, she finds out. And then I can’t buy the one I want to buy, the shiny one on Amazon, because of some issue Consumer Reports said that the better one is the boring unshiny one and I need to be more responsible and stop wasting money on stupid stuff. And so a chart of red and black dots gets to decide for me. Because one thing I’ve learned in life is to never make mom unhappy. She’s upset enough that her son turned out to be a blogger, whatever that is.

But the thing is, that trust that my mom gives to Consumer Reports was hard earned over decades of obsessive use. She trusts Consumer Reports. And if I read it I might trust it too. If they rated stuff on shininess I’d definitely subscribe. Or if they rated robots.

But suddenly Consumer Reports is crazy for the link bait. This iPhone 4 antenna problem has them going absolutely batshit crazy, and nearly every day they’re firing off a new set of recommendations, or demands, that conflict with the old recommendations and demands.

I would like to say this is just process journalism and applaud it. But they actually seem completely schizophrenic. It’s not a process, it’s chaos theory.

The best parts are the constant updates to all the old articles where they try to justify all of their conflicting justifications simultaneously.

July 2: “iPhone 4’s supposed signal woes aren’t unique, and may not be serious”

July 12: “Consumer Reports can’t recommend the iPhone 4,” adding “Cover the antenna gap with a piece of duct tape or another thick, non-conductive material. It may not be pretty, but it works.”

July 13: “Why Apple—and not its customers—should fix the iPhone 4” (what happened to the duct tape?)

People who subscribe to Consumer Reports don’t want to read about using duct tape to fix their stuff. They aren’t early adopters and they do want to be given a clear buy rating. They don’t need breathless up to the minute updates on what sticky non-conductive material will be best suited to make a broken phone work. My poor mother must be so confused right now.

So I’ll just tell her what she needs to know: Don’t buy anything that needs duct tape to work properly. DO NOT BUY an iPhone 4 until this problem is fixed. And then still don’t buy one because AT&T is awful. Buy an Android instead.