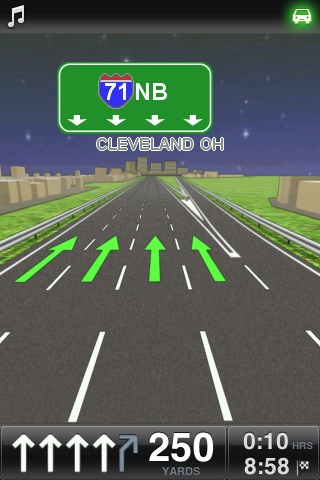 For the last couple of months I’ve been using the TomTom USA navigation app for iPhone. The big difference between this and other GPS applications is that all of the map data is stored on your phone, so no Internet connection is required to calculate routes. This is great when you’re in a dead zone, but it carries a hefty penalty in terms of file size: almost 1.5GB!

The size of the app is a bit misleading: you actually need a good bit more than that unused on your phone in order for the app to even install. I’ve got an 8GB iPhone 3G, and it took me awhile to trim down my playlists and delete lesser-used apps before I could get the TomTom app to load successfully. Then I had to do it all over again when an update was released. You cannot install or update this app over the air: the file size requires you to install it from your computer.

With a footprint well over a gigabyte, it should be no surprise that the app is slow to load. It takes almost 30 seconds for the app to load into memory and be ready for user input. The application is not particularly snappy, which can be a nuisance if you’re trying to update a route while on the go.

I found the routing to be just fine, and have no complaints about the quality of the maps or the included points of interest. I found the Ukrainian Museum-Archive while tooling around in Cleveland, Ohio. If such a niche is in the POI list, I’m confident that many other interesting places are also included. And to make things even better, the TomTom app also ties into local Google listings, allowing you to hit Google from within the TomTom app itself (obviously a data connection is required for this aspect fo the app). 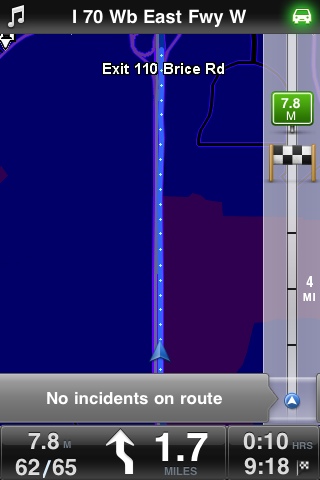 I particularly liked the automatic “night mode”: when the calculated local sunset occurs the color scheme automatically switches to a darker palette, making the app easier to see in the lower light without blinding your night vision. When the calculated local sunrise occurs, it switches back to the daytime color palette. Both palettes are user-configurable, allowing you to find a scheme that you find comfortable.

A minor nicety of the app is smooth music fading, so that currently playing songs are not awkwardly paused. Instead the music fades nicely, the TomTom voice directions are made over top of the softer music, and then the music is returned to its previous volume.

As you can see from the screenshot above, the TomTom app squeezes a lot of information into a small screen. Along the bottom you can see your current speed, the current road’s speed limit, distance to the next turn, estimated time remaining on your trip, and the current local time. Along the side you see the optional traffic report.

One of the more interesting features of the TomTom app is a TomTom Traffic subscription, which you can purchase from within the app itself. It costs $20 for a one-year subscription, and the traffic updates are integrated extremely well into the app itself. I asked TomTom how it worked, and this was the response:

We start with our own TomTom IQ Routes Technology, which uses anonymous historical speed profile data to give our customers the most efficient route for any time of day or day of week.

We then layer in real-time GPS information from our LIVE, wirelessly connected portable navigation devices, and combine this data with third-party information from a number of sources. These include GPS sensors from fleet operators, Department of Transportation (DoT) traffic cameras, DoT speed sensors, airborne/mobile spotter vehicles, digital scanners that cover many local emergency services, police callouts, and traffic “Tip Lines.”

Our users opt in to provide anonymous speed profile data via our portable navigation devices. This aggregate data is delivered when the user connects the device to a computer that has our free desktop software, TomTom HOME.

Additionally, our wirelessly connected devices (like the GO 740 LIVE) themselves provide anonymous information about real-time traffic information for the benefit of other TomTom users.

In my testing, the traffic details were extremely accurate. It reliably reported rush hour slow downs, holiday congestion, and a couple of accidents on a regular basis. Unfortunately for me, the fastest route was still usually the one through the thick of the congestion, regardless of cause.

Is it worth $20 a year extra for the traffic subscription? That’s a tough question for me to answer. If I were buying this app solely for myself, I’d probably opt not to get it. My guess is that it would simply be too infrequent that the app would be able to effectively route me around a slow down, but that’s just my opinion. If you live on the road and time matters, you might feel differently.

Complaints
I have a couple major complaints about the TomTom app. First, as previously stated, it’s a huge application that is slow to load and a bit sluggish to respond. It’s a total battery hog, so if you’re using this app in the car be sure to bring along a charging cable of some sort to keep your phone alive.

A subtle related issue is processing speed. If you miss your turn, the app re-calculates and suggests the next best turn for you. Unfortunately, it often told me to turn onto the street I was already passing. At 35 miles per hour in a city, you’re often driving faster than the iPhone 3G can calculate. Maybe an iPhone 4 will be better.

Second, the GPS reception on my phone was pretty weak. If I placed the phone on my lap or between the seats next to me, I would consistently lose GPS reception. I’d have to hold the phone up or place it on the dashboard in order to maintain a decent connection to the satellites. When GPS reception is lost, the screen turns monochrome and a status message appears at the top of the display. While driving to and from Lexington, KY, I’d lose signal about once every five minutes.

Third, the TomTom app announces driving directions in a manner that I wasn’t quite expecting. It’ll say “In 300 yards, turn left onto Suchandsuch Street”. Then, after 300 yards, it’ll say “Turn left”. It will not repeat the name of the street onto which I am to turn. This took a little getting used to, and caused me to miss my turn on more than one occasion. My wife considered this a fatal flaw and completely panned my use of the app as a result. Once you know what to expect, it’s not that big a deal; but it would be nicer if the street name would be repeated, for safety sake.

Conclusion
For $50 you get a lot of app. For an extra $20 you get a lot more in the way of a traffic subscription. If you need turn-by-turn directions on your phone and simply can’t (or won’t) buy a dedicated GPS device, the TomTom app is a good choice.