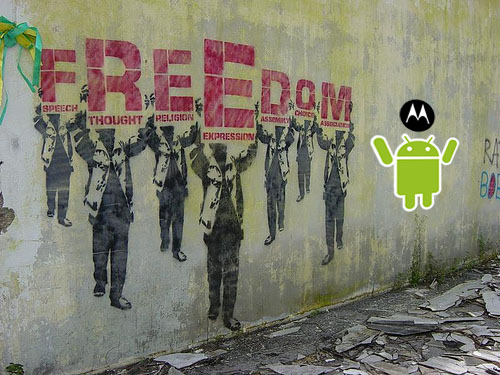 You know what I love about Android? Freedom to mod. I love that, if I’m unhappy with what I’ve been dealt by The Man, I can do something about it. I can’t even imagine using my Hero with the stock ROM+apps. Freedom, baby. That’s what it’s all about.

The new Droid X and Droid 2, like the Milestone (but not Droid) before it, will have a digitally signed bootloader, making it just that much more difficult to flash a custom ROM onto the device. A signed bootloader won’t affect the rooting of the handset, though, so at least it’s not all poop-in-your-cupcakes today.

As I said above, the original Droid didn’t suffer from a signed bootloader, and — as such — became a rather popular phone in the Android modding scene. So you can imagine that it caused quite a stir when the EU variant of the Droid, the Milestone, came locked-down. Android and Me share a tasty quote from the time of this controversy by Lori Fraleigh at Motorola, which nicely outlines Moto’s stance:

“Securing the software on our handsets, thereby preventing a non-Motorola ROM image from being loaded, has been our common practice for many years. This practice is driven by a number of different business factors. When we do deviate from our normal practice, such as we did with the DROID, there is a specific business reason for doing so. We understand this can result in some confusion, and apologize for any frustration.”

So, unless Moto really believe there is a business benefit to you guys screwing with your handsets (and potentially claiming a futzed ROM flash under warranty), you can pretty much guarantee the practice to continue.

[via Android and Me]
[image via Libertad Zero]