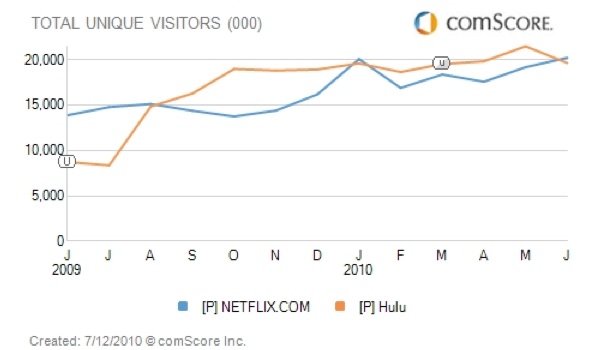 As the great race to become America’s favorite source of full-length TV and movie streams gets underway, two of the favorites in that race are Hulu and Netflix. Hulu has a fairly large headstart. It is the No. 2 video site in the U.S after YouTube, and serves more than 1 billion videos a month. Meanwhile, Netflix, which is constantly adding to its catalog of streaming movies, only just broke into the top 20 last February. However, it is catching up fast, with serious streaming offerings on laptops, the Wii, and the iPad.

These video view numbers come from comScore Video Metrix, but by a more recent, and more general, measure Netflix is edging past Hulu. According to comScore, plain Web traffic in terms of unique individual visitors to Netflix was 20.2 million in June, 2010, just edging past Hulu’s 19.7 million (see chart). The vast majority of Netflix visitors are there to add movies to their mail-in DVD list, but increasingly they are starting to stream them directly as well. Overall traffic has been growing nicely since April, when Netflix streaming became available on the Wii. Traffic is up 15 percent since April (during a time when Hulu traffic has been essentially flat), and 46 percent from last year. On an annual basis, Hulu is still growing much faster, though, with 126 percent growth.

Even when you look at total time spent on each site, which is a closer approximation of viewing time (although with Netflix it includes browsing the site picking DVDs as well), Netflix also beats Hulu, based on comScore’s numbers (ditto with pageviews). In June, visitors in the U.S. logged an estimated 662 million minutes on Netflix, compared to 598 million minutes on Hulu (see chart below). Netflix shows a steady 62 percent annual rise in minutes spent on the site, compared to an even healthier 97 percent gain for Hulu. But in June, comScore shows a 29 percent drop in time spent on Hulu.

Whether that is just a glitch in comScore’s numbers or an actual drop in viewership because of summer reruns, Netflix does have a built-in advantage of streaming more movies, which are longer, than TV shows. I just streamed a movie from Netflix this weekend, and it looked indistinguishable from a DVD on my large flat-screen TV. The reason I don’t do it more often is because it is a pain to hook up my laptop to my TV. As it becomes easier and easier to stream directly to your TV or iPad, Netflix becomes another source of on-demand movies that you are already paying for (you get to stream movies for free as part of your monthly subscription).

That said, traffic and time spent does not equal videos streamed, and Hulu still dominates by all indications. Hulu is also adding to its fare with better shows and movies via its own subscription service, Hulu Plus, and killer iPad app. But I wouldn’t be surprised to see Netflix break into the top 10 movie streaming sites by the end of the year, and really start to put pressure on Hulu next year. 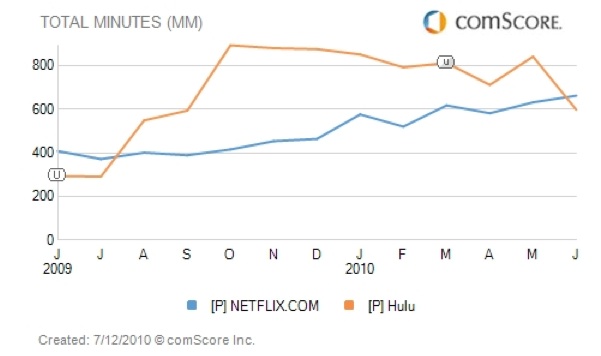