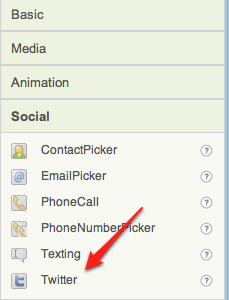 This morning Google officially unveiled App Inventor for Android, giving non-developer Android users the ability to build their own applications using a visual, puzzle-like interface. I’ve been playing around with the tool all morning (more on that soon), and noticed that one set of Components allows users to seamlessly integrate Twitter functionality. As far as I can tell this is the only third-party service that’s currently included, but Google tells us that it will eventually offer a Component Developer Kit, giving third party developers the ability to integrate their services as well. And that could be a very big deal.

For those that haven’t seen it in action, building an application in App Inventor involves putting together puzzle pieces called Components. Want to do something when the user taps on a Button? Use the Button.Click component. Want to change the color of something to Red? There’s a component for that too. There are also over twenty Twitter-related components, which let you integrate functionality like Twitter Search, user authentication, tweeting, and direct messaging with a few drag-and-drops.

Now imagine what will happen when you can do the same thing for Facebook, Dropbox, Foursquare and other services that offer an API or widgets. Implementing Facebook Connect could potentially be as simple as dragging-and-dropping the proper puzzle piece. Your custom data entry app could possibly upload files to your Dropbox account. Likewise, it may also be possible for developers to build Components that don’t necessarily tie directly into third party services but are more advanced than the default Component set. It’s still obviously very early days for App Inventor, and this all assumes that third parties will be throwing support behind the CDK, but it’s quite exciting.

Google declined to get into specifics on the timing of the release of the CDK. App Inventor is still in Google Labs and the core set of components still needs some work, so this is probably still a way off. 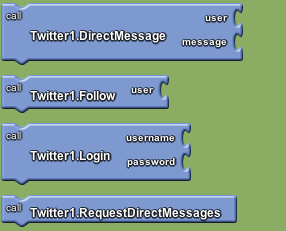