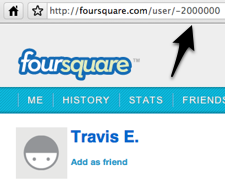 It appears that Foursquare has just crossed the 2 million users mark this morning. The location based social network has been growing fast, adding 100,000 users per week. Only three months ago, Foursquare passed one million users after taking a year to accumulate one million members.

Over the past several months, Foursquare has had a number of impressive stats for a startup. Some of them involved SXSW, some involved overall check-ins numbers. And it seems to be growing faster than its main competitor, Gowalla.

Of course, to expand upon this growth Foursquare has just raised $20 million in funding at a $95 million pre-money valuation, led Andreessen Horowitz with existing investors Union Square Ventures and O’Reilly AlphaTech Ventures participating. The new funding is going to be used to hire additional staff, for product development and a new office space. And we know that Foursquare has some interesting ideas to incorporate gaming with check-ins.

It’s important to note that other competitors have already crossed this mark. MyTown, another location-based network hit that number in May, Brightkite hit 2 million users in February. And, Loopt just passed 4 million users.

Congrats to Travis E for being Foursquare’s 2 millionth member.