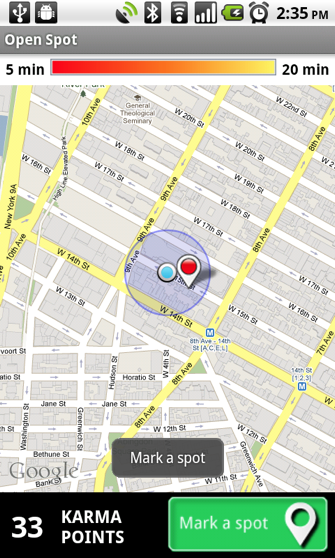 Sick of circling the city streets in your car, looking for a spot — any spot — that you can squeeze into? Google may have the answer, or at least the very beginnings of one, though it’s going to heavily rely on the good deeds of your peers to be a success. Meet Google Open Spot, the latest addition to Google Labs, which has just released a new application for Android phones.

The service is really straightforward: fire up the Android application (it doesn’t look like there’s a web-based version yet), and you’ll see a map with nearby open parking spots marked with colored dots. These spots were placed by other users, who are supposed to hit the app’s ‘Mark a Spot’ button when they leave a crowded parking lot or happen to see an open spot as they walk by.

The color of each available spot is tied to how long ago it was marked by another user — a spot that’s 10-20 minutes old will look yellow, while a spot marked within the last five minutes will be bright red. After 20 minutes spots are removed from the map. You’re able to see parking spots within a .9 mile radius of your current location.

That’s all well and good, but there isn’t a major incentive to actually mark spots yet. Google is employing a basic karma system to reward users when they share an available spot, but karma doesn’t actually award any bonuses in terms of making it easier to find parking — it’s just there to make you feel good. That said, if Google gets creative with the system (perhaps by adding a leader board), then that might provide sufficient incentive to get people using this. I’m not particularly optimistic, but here’s to hoping it works. Of course, even if a ton of people really do start marking their spots, it won’t necessarily be much help — in crowded cities, many spots are only available for a few seconds.

In case you were thinking of making parking even more of a hassle than it already is by adding fake spots, don’t bother (please). While parking submissions are anonymous, the Open Spot FAQ says that Google has ways to monitor for so-called ‘griefers’ and can make sure they aren’t leaving multiple fake parking spots.