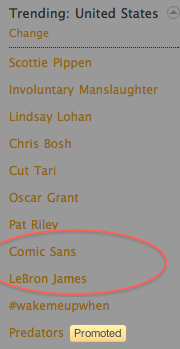 The national distraction is over. NBA star LeBron James has chosen the team he’s going to play for: the Miami Heat. Of course, this means that he won’t be returning to his hometown Cleveland Cavaliers and owner Dan Gilbert is not too happy about that. And he made that very clear to everyone tonight in a scathing letter posted to the Cavs main page on NBA.com.

A letter, posted in Comic Sans.

Yes, Gilbert wrote the entire letter in probably the worst font ever to grace the computer screen. Normally a staple among six year old and grandmothers, Glibert for some reason decided to use the font to write what will undoubtedly be the most public message he will ever write. And it’s too bad, because the content of the message itself is quite good — very juicy. Gilbert’s use of quotes, capitalization, and bolded letters makes it very clear just how pissed off he is.

And that’s good because all of Cleveland (incidentally, my hometown) is pissed off tonight as well. Gilbert’s letter should give some comfort, if for nothing else that he guarantees — yes, guarantees — that the Cavs will win a championship before LeBron does. This is a city that hasn’t won any major sports championship in nearly 50 years (and that was when the Cleveland Browns won the NFL Championship in 1964 before there were even Super Bowls).

But again, all anyone can talk about is the damn Comic Sans faux pas. “Comic Sans” is currently a Trending Topic on Twitter thanks to the letter — just above “LeBron James”!

Thomson Reuters’ Anthony De Rosa may have summed in up best in a tweet: “The last time I saw a letter written in Comic Sans it was a chain email containing LOLcats from my mother.”

Apparently, Gilbert doesn’t keep up too well with some of this here Internet stuff. I await a LeBron response in Wingdings. 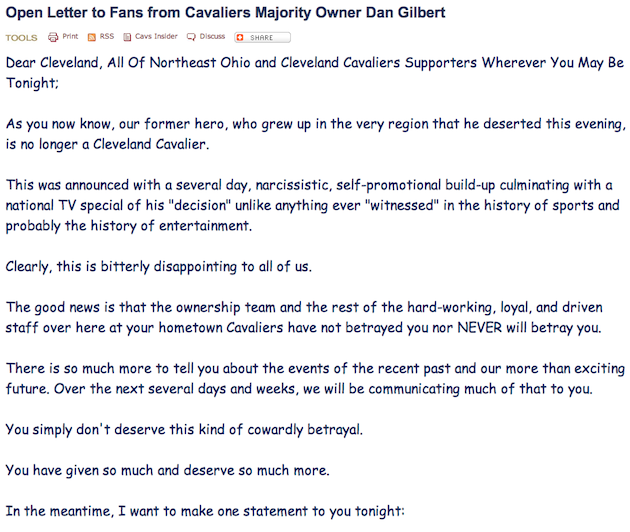 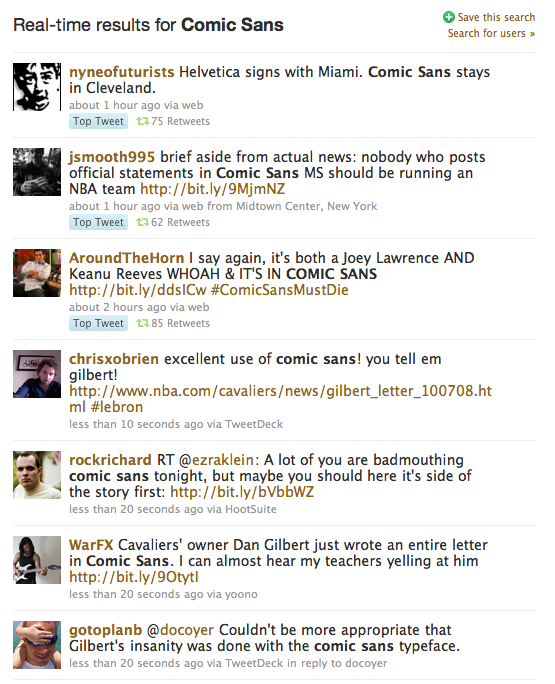