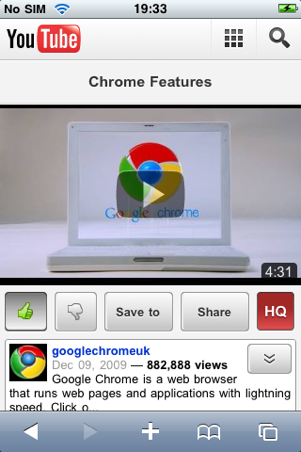 If you’ve got a phone with an HTML5 compliant browser, you’ll probably want to check out YouTube’s new mobile site, which is rolling out over the next few hours at m.youtube.com. It’s a major upgrade from the old mobile web app, with a more polished UI and better load times. It also uses plenty of HTML5 features, including the video tag. But most important is the fact that the web app has superior video quality when compared to native applications —  namely the iPhone’s — and it will soon feature more content as well. It’s also widely available, with support for nearly any HTML5 compliant mobile browser, including those on the iPhone and Android devices.

Of course, YouTube already has a mobile application with massive install base — every iOS device, all 100 million of them, came with a native YouTube application. But during a presentation at YouTube’s headquarters today, product manager Andrey Doronichev made it clear that the new web-based application is superior in just about every way, and it wasn’t hard to detect some tension between YouTube and Apple. This underscores a bigger trend, as Google shifts toward favoring web applications over native apps whenever it can.

You see, YouTube doesn’t actually control the native app that ships with the iPhone — that’s all Apple, though YouTube obviously collaborates with them when asked to. And it’s clear that the Apple team hasn’t done such a great job keeping up with YouTube’s latest improvements. In one particularly telling demo, Doronichev pulled out two iPhones and pitted the native YouTube application against the new m.YouTube.com. The web app offered a number of advantages, including auto-complete in search and a UI that’s more consistent with the latest version of the YouTube webpage (the iPhone app still uses YouTube’s 5-star rating system, which was abandoned in January in favor of a binary ‘Like’ system). Most important, the video quality of the web application was leaps and bounds ahead of the iPhone app — Doronichev explained that this was because the iPhone app still uses a video streaming format that was developed for Edge, not 3G. Video on the HTML5 app looked much better, and was snappier to boot.

The web application also comes with a few other differences. Doronichev says that it gives YouTube more flexibility when it comes to rapid iteration, and it also opens the door to a broader array of mobile ads. This is important — Doronichev says it means that the web app will eventually have access to more content than the native applications, because content owners will have more advertising options. 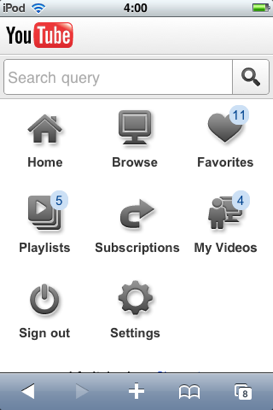 There’s still one big problem facing the web application, though, and that’s increasing user awareness. YouTube says that the number of video views streamed to mobile devices has increased by 160% over the last year, and that YouTube is now seeing 100 million mobile views per day (that’s as many as the YouTube website had when it was acquired by Google in 2006). My hunch is that a lot of those views are coming from native applications, especially those on iPhones and iPod Touch. And to those users, the YouTube experience is the native application their phones came with, not the mobile browser site. Doronichev says that users may start using the web app more as it continues to improve over its native counterparts (especially as it takes the lead in terms of content available), but I suspect it will take a major education and promotional campaign to drive a big shift in the way users access YouTube.

Update: Well, this is interesting. If you’re on an iPhone and you browse to the YouTube mobile site, it will prompt you to “install” it on your iPhone (it adds a link to your iPhone’s home screen). Looks like Google isn’t wasting any time in getting people to switch. One other thing to note: once you’ve “installed” the web app, the logo shown on the iPhone home screen is actually the YouTube logo, whereas the native iPhone application is an image of an outdated TV. I suspect users will be more attracted to the former. 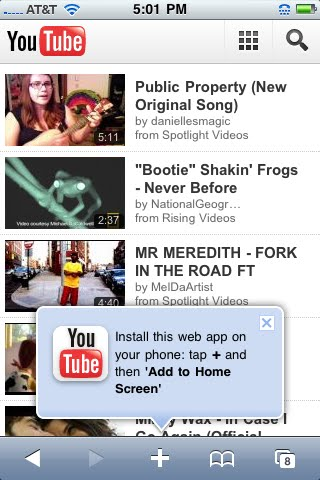 One caveat: Doronichev says that there are still some bugs with the web app on the iPhone 4, which will be cleaned up in the next few weeks.