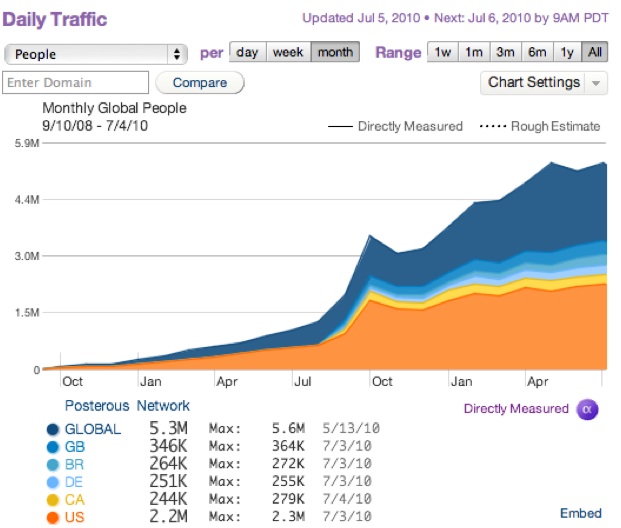 Somewhere in between full blogging platforms like WordPress and the 140-character limit of Twitter, true microblogging sites like Tumblr and Posterous are taking off. I call these true microblogging sites because they are designed for quick hits but can support photos, themes, and other more blog-like features. Tumblr has been around longer and is getting quite big (23 million monthly unique global visitors, according to Quantcast) , but the younger Posterous is also seeing some decent growth.

According to Quantcast, Posterous has 5.3 million monthly unique global visitors, with 2.2 million in the U.S. (Both Posterous and Tumblr are directly measured by Quantcast). If you look at the Quantcast chart above, you can see the different growth spurts Posterous has gone through. The first year after its launch in June, 2008, it’s growth was pretty gradual. But then, almost a year ago, it introduced an iPhone app which allows users to post their photos and thoughts directly to their Posterous blogs. One of the main uses of Posterous is to share photos with some commentary.

Then earlier this year it started integrating more tightly with Twitter through its Post.ly service, and kept steadily adding new features throughout the year.

Currently the company is trying to fuel growth through a switching campaign targeted at 15 competing services such as Ning and Twitpic, which is getting it in some hot water.

Even taking the more conservative estimates from comScore, which shows Posterous with only 2.5 million worldwide unique visitors in May, 2010, the site is up 700 percent since comScore started collecting data 11 months prior. It is safe to assume that the annual growth is north of 700 percent. Tumblr, by comparison, is up 174 percent during the same period (off a much larger base of users, which comScore estimates 10.7 million worldwide unques in May, 2010). Both are growing spectacularly because when you lower the barriers to publishing, the posts (and audience) will follow. 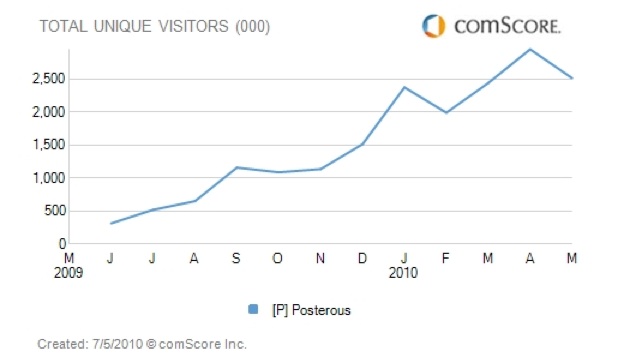 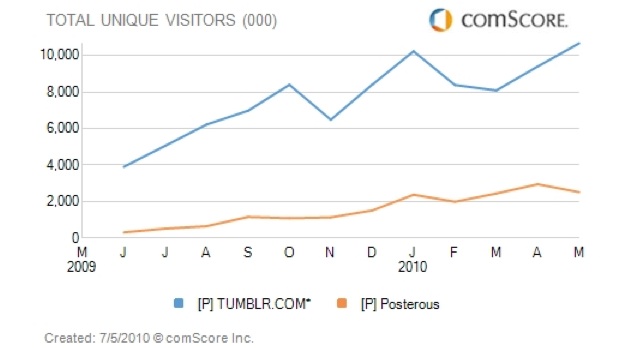