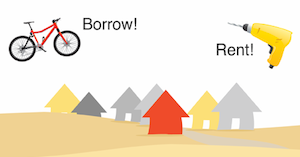 Back in October, we covered a new sharing service called NeighborGoods. When you see the term “sharing” associated with a startup, your eyes may glaze over at this point — but NeighborGoods is a bit different because it’s all about actually sharing stuff. Like, in the real world. Sadly, the site was previously only open to users in Southern California. But today brings its nationwide roll-out.

As a refresher on the idea behind it, say you have something sort of expensive you bought but don’t use all that often. For example, a vacuum cleaner. Most of the time it just sits there, unused. But what if you could let someone else around you borrow it, or even rent it for a day? That’s what NeighborGoods facilitates.

The key to all of this is local. Obviously, most people aren’t going to be comfortable shipping their stuff across the country just to lend it to someone (and that’s sort of a logistical nightmare). But if you live near someone who has something you want or vice versa, this system works. That’s why it’s key to have the service available across the entire U.S., rather than just in Southern California.

So how does NeighborGoods make money? Well, the obvious idea would be to put fees on top of what users who rent things out charge — but they’re not doing that. Instead, they’ve baked a small fee ($4.99) into the verification process. This optional process ensures that someone lives where they say they do, so people can feel better about lending to and borrowing from them.

There’s also an option for members to chip in if they like the service. NeighborGoods is still a bootstrapped startup.

Check out a bit more in the video below.