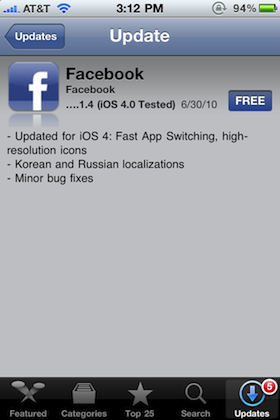 Well, it took a bit longer than other iPhone apps that aren’t, you know, the most downloaded apps of all time, but Facebook has finally today updated its iPhone app to be iOS 4-compatible.

A couple weeks ago, I ripped Facebook for releasing an update without this support (and a broken UI to boot). Competitors like Twitter and LinkedIn were iOS 4-compatible either before or immediately after the launch of the new OS on the 21st. Facebook version 3.1.4, which has just gone live, finally gets Facebook up to speed.

All indications are that adding fast app switching and support for high resolution icons is relatively easy, so it was odd that Facebook, again, the most popular app, was taking so long. But that may have something to do with the service’s relatively new iPhone team after developer Joe Hewitt decided he wanted to work on other projects.

Facebook still has no native iPad app despite that fact that tons of people continue to search for one, and it would undoubtedly be one of the most popular apps on that platform too.

Facebook for iPhone 3.1.4 also brings “minor bug fixes” (the UI has been fixed), and support for Korean and Russian localizations. You can find the free app here.