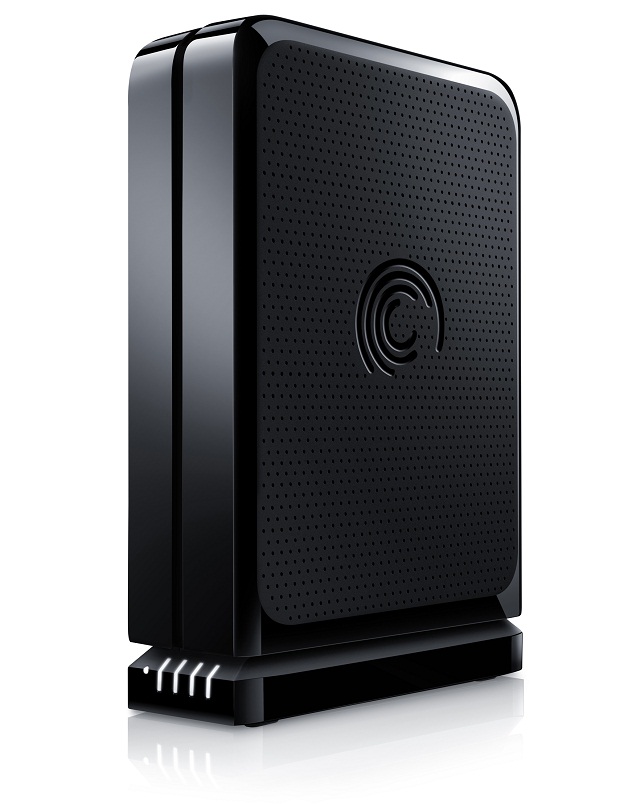 Ladies and gents, this is a 3TB hard drive. Let that sink in. Three effin terabytes. That’s a whole lot of data on one hard drive. Seagate previously stated that the drive would be out by year’s end, but here it is and it’s barely summer.

The FreeAgent GoFlex family is Seagate’s first product line to sport the gigantic hard drive. USB 3.0, USB 2.0 and Firewire 800 via Seagate’s GoFlex adapters are tasked with the job of transferring the data to and fro the connected computer. The USB 2.0 flavor is available right now with the MSRP $249.

The real story, however, isn’t that Seagate managed to stuff 3TB into one 3.5-inch hard drive. It’s that Seagate is actually bringing it to market amid so many potential problems.

You see, a lot of computers can’t use the full 3TB at once. It has to do with the LBA (logical block addressing) standard that was wrote back in the days of DOS. The original standard limited drives to 2.1TB, which seemed like a whole lot back in the roaring ’80s.

32-bit OS like Windows and OS X 10.5 and below will only see partitions 2.1TB or smaller. The full 3TB can be used, but only in chunks that’s supported by LBA. Then there are issues with MBR’s, RAID systems and hard drive controllers, too. But Seagate has pushed forward and outed the drive anyway.

Of course many of the issues associated with these large drives are null seeing as this implementation is as an external drive. By putting the 3TB drive in an external enclosure, Seagate is sort of saying it’s not meant for primary disk usage or RAID arrays. That’s not going to stop people from cracking the case and slapping the massive drive into their primary rigs, though. It will however give Seagate customer service an easy out until all the driver issues are worked out. Smart.

A key addition to the company’s recently introduced GoFlex family of hard drives, the 3TB GoFlex Desk couples immense capacity with the flexibility to adapt the drive’s USB 2.0 interface to a USB 3.0 or FireWire 800 connection to meet varying performance and transfer speed needs. Consumers can easily create, store and access content from either a Windows® or Mac OS X computer on the GoFlex Desk, thanks to an included NTFS driver for Mac.

A recent report by Parks Associates indicates the average consumer household will see its digital media storage needs grow to nearly 900GB by year-end 2014, driven in large part by video downloads, managed copies of Blu-ray
discs, and increasing use of DVR recording capabilities[1]. The GoFlex Desk drive delivers unconstrained[2], high-capacity storage and automatic, continuous backup with software file encryption to keep all data safe and secure[3]. The standard USB 2.0 interface can be upgraded to USB 3.0 or FireWire® 800 by coupling the drive with the appropriate GoFlex upgrade adapter to increase file transfer performance by up to 10x for easier copying or sharing of files.

“As the definition quality of digital cameras increases, playback devices such as digital photo frames and MP3 players proliferate and the use of the Internet for downloading music and video continues to grow, more files accumulate in the home,” said Kurt Scherf. “Consumers who are active in digital media creation and consumption will witness their digital media storage needs grow nine-fold by 2014, driving the demand for higher capacity, easy-to-use storage solutions.”

GoFlex Desk is also compatible with both Windows and Mac computers. Each drive includes an NTFS driver for Mac, which allows the drive to store and access files from both Windows and Mac OS X computers without reformatting. The NTFS driver is simply installed once on a Mac computer, allowing it to read and write files on a Windows formatted[4] drive. Its sleek black, 3.5-inch design sits either vertically or horizontally to accommodate any desktop environment.

The 3TB GoFlex Desk drive with USB 2.0 adapter can be purchased on Seagate.com and through select retailers for $249.99.