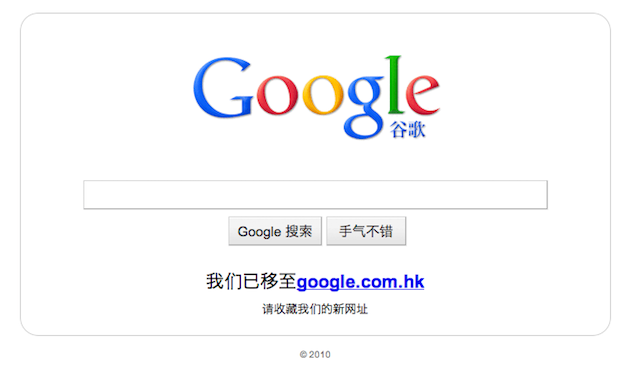 Back in January, with big balls, Google wrote the following:

We have decided we are no longer willing to continue censoring our results on Google.cn, and so over the next few weeks we will be discussing with the Chinese government the basis on which we could operate an unfiltered search engine within the law, if at all. We recognize that this may well mean having to shut down Google.cn, and potentially our offices in China.

In March, Google backed that talk up by redirecting google.cn to google.com.hk, writing the following:

Figuring out how to make good on our promise to stop censoring search on Google.cn has been hard. We want as many people in the world as possible to have access to our services, including users in mainland China, yet the Chinese government has been crystal clear throughout our discussions that self-censorship is a non-negotiable legal requirement. We believe this new approach of providing uncensored search in simplified Chinese from Google.com.hk is a sensible solution to the challenges we’ve faced—it’s entirely legal and will meaningfully increase access to information for people in China. We very much hope that the Chinese government respects our decision, though we are well aware that it could at any time block access to our services. We will therefore be carefully monitoring access issues, and have created this new web page, which we will update regularly each day, so that everyone can see which Google services are available in China.

The Chinese government has finally responded (at least in a more formal way), and they’re clearly not happy — no surprise there. But what is kind of surprising is that Google is sort of backing down now. Well, maybe not so surprising. But a bit disappointing.

Tonight, David Drummond, Google’s top legal executive, has written a post outlining Google’s “new approach” to China. Basically, they’re ending the redirect from google.cn to google.com.hk — and restarting the Chinese Google page. But instead of being the full (and fully censored) site that it once was, Google is making it into a completely degraded search engine (think: music and text translation), and instead providing a link to the Hong Kong Google site (which is not censored at all).

Google’s position is clearly that’s they’re not ready to fully give up on China just yet. While they’re still refusing to censor (which Chinese law requires), they are willing to stop the redirect which China finds “unacceptable.” Why? Because if they don’t, China won’t renew the Internet Content Provider license — google.cn will cease to be.

On one hand, I obviously understand why Google is making this pivot and slightly going back on their powerful action. On the other hand, as I noted above, Google clearly knew the risks it was taking with their actions — they did them anyway. That’s what made the move seem so ballsy and brilliant. But, of course, that was before the first real punch was thrown. Now that it has been, and they’re flinching — no matter how slightly — the actions seem less ballsy, less brilliant.

Google’s take now is that this is “right” because the shut down of google.cn is a “prospect dreaded by many of our Chinese users.” Okay — but what are those users really getting with this new google.cn? A music search engine? A text translator? Are any of these things likely to be a big help to anyone over there? Why does Google even want to put its name on that neutered product?

The power was all in the redirect. It was a big “fuck you” to China. They were saying: “You know everyone that goes to our Chinese site expecting censored results? Well, now we’re going to send them to an uncensored site. Do something about it.” Well, China did. And now Google’s reaction is to change that “fuck you” into a more docile “we don’t like you very much” with that link to google.com.hk from google.cn.

The link is weak. It’s moving responsibility for uncensored searches away from Google and putting it into the laps of Chinese users. “No, I swear, they got to that site themselves.”

What will be interesting to see next is if China demands Google remove that link. And if Google does…

Again, this is all easy for me to say without having to worry about Google’s business prospects and their Chinese user base. But the power of Google’s initial message was anchored by the fact that they said they were ready to leave China and shut down google.cn if it came to that. Now that it has come to that, and it’s clear they’re not going to do that anytime soon, it’s just a little disappointing.

Is giving Chinese users access to a neutered search engine and a link a more powerful message than having them go to google.cn and finding it not working thanks to their government? I don’t think so.