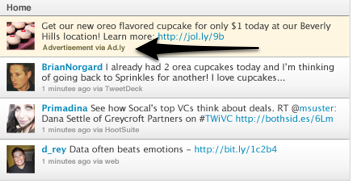 In-stream advertising network Ad.ly, which launched last year, recently expanded beyond the Twitter ad model to serve ads in MySpace streams. And today, the startup is launching an ad network for third-party developers, allowing clients to serve ads to users within their applications.

Called Ad.ly for Apps, the new network allows developers to leverage an API to serve contextually and locally targeted ads to app users based on the streams they are reading and where they are located. For example, Ad.ly will allow developers who create clients to serve Facebook, Twitter, MySpace and LinkedIn updates to serve an ad for a local LA restaurant to a user who lives in LA or has been Tweeting about LA.

Ad.ly founder Sean Rad says the platform is completely realtime and is essentially an “AdSense for the stream.” Developers can tap into the Ad.ly Apps API, which take as its input the contents of the stream and returns one or more targeted in-stream ads, which the app can stylize and display adjacent the given stream. Ads are served on top of a stream, not within the stream. Advertisers themselves can sign up to serve ads on third party apps through Ad.ly’s self-service platform.

This ad network joins Ad.ly’s influencer ad network, which links up advertisers with users and then distribute links to marketing campaigns through the user’s Tweet streams or MySpace streams with full disclosure. Ad.ly’s recently launched self service platform platform enables Advertisers to connect with any user who signs up for Ad.ly’s service.

Rad says that the App Ads will probably not see as high of CTRs as Ad.ly’s influencer ads, which see average campaign CTR ranges from 1%-3.5%. But he maintains that the in-app ads will perform well compared to other in-stream advertising options.

But Ad.ly may be playing with fire here when it comes to serving ads within a Twitter stream. A few weeks ago, Twitter COO Dick Costolo announced a strict policy on developers serving in-stream ads within the Twitter stream timeline that is leveraging Twitter’s API. The updated Twitter TOS was thought to ban in-stream ads and affect in-stream ad networks like Ad.ly.

However, Ad.ly’s was quick to respond that their influencer service does not violate Twitter’s TOS and will continue to operate as is. While Rad says the new network doesn’t currently violate Twitter’s TOS because the ads are not technically served within the stream or timeline, we’re all assuming that Twitter may crack down even harder on these Twitter advertising networks.

Ad.ly is also facing a number of worthy competitors in this space, including 140 Proof, OneRiot, and TweetUp. The startup, which just raised $5 million in funding, says that it has enlisted a number of third party social media app developers to use its ad platform but declined to name these developers.