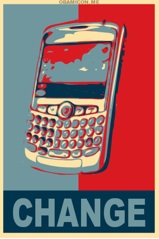 Another profitable quarter and another hit to RIM’s stock price. People are buying Blackberries, but investors are not buying RIM. Why? Short answer. No buzz. Despite continuing to reign supreme as America’s smartphone of choice, RIM’s Blackberry devices are not creating enough excitement in the market. Sure, RIM saw 20 percent profit growth in the first quarter of 2010, but they’ve also watched their market share dwindle as rivals Apple and Android grow. If there was ever a time for a change, it’s now.

BlackBerry, which is still ranked ahead of the iPhone and Android in worldwide popularity, can’t keep telling the market its working on an iPhone-killer that remains in the distant horizon. It needs a business makeover.

As a branding and PR executive, I’ve taken some of the planning process around our work with mobile startups and applied it to RIM with five ways the Canadian company can boost their hopes and bring sexy back to Blackberry. (They can thank me later).

1. Leverage Obama
The number one celebrity in the world is a crackberry addict, yet RIM’s dropped the ball on capitalizing on this once-in-a-lifetime product endorsement. Maybe the company is hesitant to become too seemingly political, but this is a man who’s selling US Weekly covers on par with Brangelina. Experts estimate his endorsement of BlackBerry would be worth roughly $50 million, I believe that’s grossly low. Obama is worth at least $250 million in annual comparative advertising value, or the price it would cost to buy that much print, online and TV time. But what is RIM marketing doing to capitalize on this opportunity? If the President of the United States trusts the security of the RIM operating system, shouldn’t you? Now that’s a tagline! RIM needs to move fast. Obama’s popularity is waning like a Hollywood marriage, so seize the moment.

Make a ‘Barackberry’ version. Bullet-proof, global data roaming and super secure, just like Barack’s berry. It could become the ‘must-have’ tech toy from D.C. to Dubai. RIM should charge $10,000 so that all the hedge fund types buy in as well. Barackberrys should be given out at uber-influencer events such as TED, Davos and young exec confabs like the Summit Series.

2. Launch your Silicon Valley-based presence. Go big or go back to Canada.
RIM, based in Waterloo, Ontario is not part of the smartphone race conversation between Android and iPhone because a great deal of the conversation happens in Silicon Valley. To get into the conversation, RIM needs to get into Silicon Valley. RIM needs to step up its game and launch a massive Silicon Valley presence—and not just its existing outpost in Redwood City. A big presence in Mountain View or a swish office in San Francisco is the answer. There should be free food and Molson Beer flowing round the clock. Announce it at the Blackberry’s DevCon, which is taking place in San Francisco this September.

3. Buy Hollywood
From Silicon Valley to Silicone Valley, RIM needs both ends of the Golden State. Apple understands the value of product placement and, for over a decade, has garnered more product placement than nearly any other tech brand. Featured in TV shows like The Office and Entourage, Apple products are dominating pop culture. Apple products were featured in 40 percent of the top box office hits of 2009. In fact Steve Jobs himself is the American most kids admire, even more than Oprah. But unlike our kids’ admiration, Hollywood can be bought quickly. After all, even Carrie Bradshaw sold her iconic Apple computer for an HP in the latest Sex and the City movie. RIM needs to step up and put a Blackberry in the hand of damn near every “connected influencer” character out there. 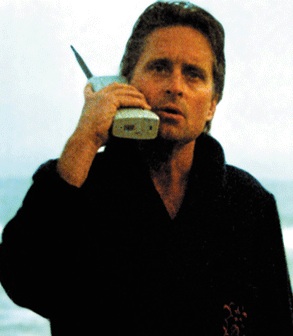 Own a movie. A good one to start with would have been Wall Street: Money Never Sleeps. Come on. Every banker has a Blackberry. What better device to use to bring down the global economy than a BB Bold? Gordon Gecko has Blackberry written all over him. And he needs an upgrade from the brick he used in the original movie.

While you’re on Sunset Avenue, revamp your TV ads which feature the Beatles and U2. Ask yourself what you are selling? Mobile phones or Flomax? While BlackBerry is spending millions for the rights to “All You Need is Love,” Apple is being pitched by labels and bands, many of whom want nothing in return but the free promotion of having their music featured in TV ads. After Feist’s ‘1-2-3-4’ appeared in an Apple iPod nano commercial, sales of her song spiked 586 percent, according to Nielsen SoundScan. Instead of breaking the bank, BlackBerry could be breaking new bands.

4. Scrap your apps.
BlackBerry App World is a failure. Billing, developer marketing, and technical support are weak. A poll of AppLaunchPR developers rate the App World last in terms of developer relations and ease of use of all major smartphone app platforms.

Beyond technical issues, RIM needs to change its developer payouts. Recent projections show Apple’s profit from apps may only equal 1 percent of total profits. It’s only promoting apps to sell hardware. Period. If that’s the case, then why should BlackBerry even worry about making money from apps? Apps should be a loss leader.

Blackberry apps should give 100 percent of the revenue to developers and even go one better. Instead of U2, focus more TV ads around your hot apps and their developers. Make them the rockstars. Oh yeah, and where’s RIM’s own mobile ad network? Now that’s really the hottest accessory for 2010. Google has one, so does Apple. RIM announced a strategy to work with multiple networks and no one listened. Perhaps something more strategic is necessary to help developers market and distribute their apps.

5. Focus on an iTunes-killer, not an iPhone-killer
One of Apple’s most valued assets is that the company holds more credit cards on file than any other company besides Amazon. ITunes is the true barrier to entry in the smartphone race.

First, purchase a music subscription service like Spotify or Rdio. Blackberry users want music but can’t find anything within the device. RIM should seize this opportunity. Music and apps are only two customer billing entry points. RIM may want to consider strategic M&A to broaden its credit card database.

RIM reminds me of a line from the movie Swingers: “You’re money and you don’t even know it.” RIM is well positioned from a cash and market share perspective to make BlackBerry a global, mobile, must-have addiction, but the company needs to make bold moves now or risk becoming Nokia.