Elevation Partners has quietly amassed another huge chunk of Facebook shares on the secondary market, according to a recent letter to its limited partners. Elevation spent $120 million for five million more Facebook shares. This is on top of Elevation’s $90 million, 2.5 million share purchase back in November.

That November deal has already gone up 2.5 times in value in a short eight months, making Facebook one of the better performing deals in Elevation’s portfolio and an enviable holding for any firm. Even though the bulk of Elevation’s Facebook shares were purchased at the more recent price, if you blend the two deals, there’s still an on-paper gain. Blended together, Elevation’s 7.5 million shares were purchased at a $14 billion valuation, and Facebook is trading at upwards of $24 billion on the secondary market today.

Sure, the appreciation looks good, but a lot of people– including us when we first broke the story– have alleged that these deals are ones any hedge fund could do. That’s not actually true, according to several sources close to the deal. Facebook controls who buys its shares on the secondary 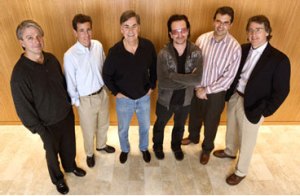 market, and Elevation has tight ties with the company. Elevation founders Roger McNamee and Bono were personal investors in Facebook, and Facebook COO Sheryl Sandberg’s brother-in-law is Mark Bodnick, another Elevation partner. This isn’t an accidental tie-up.

Elevation’s premature obituary is a popular story these days. Things haven’t worked out as planned for the firm—at all— but that’s not unique in the venture market these days, and the tide is turning for Elevation. The Palm-albatross is gone, and the firm didn’t lose money on the deal—not a trivial milestone considering it was 20% of the fund. (Photo above from the good old Elevation days.)

Today, Elevation is clearly switching strategies. Ambitious ideas of remaking the media business and investing huge percentages of a fund in revamping legacy companies are gone. The fund has more than $100 million left to invest, and that money likely won’t go into another Palm or Forbes, but another Yelp or Facebook.

These mature Web 2.0 companies have far more assured success, the question is how much of a multiple late-stage investors like Elevation can make. As an added plus, these type of deals don’t take anywhere near the hand-holding and work that the big ambitious, swing-for-the-fences turnarounds required. That was likely the real reason Elevation was laying off support staff last week, not necessarily an indication of the firm’s health. Elevation is simply becoming a different firm.

And Elevation is playing a new role for the Web 2.0 ecosystem too—staving off the dreaded IPO. Rumors of a Facebook IPO have swirled since at least 2007, despite Facebook founder and CEO Mark Zuckerberg’s long time apprehension to rush into the world of short-term traders and activist hedge funds.

There are a few good reasons for a company to go public. An IPO can net a company a lot of cash, allow employees to get liquidity on their shares, and give a privately-held company a frequently-priced stock currency it can use for acquisitions. But Facebook has managed to do a lot of that with the secondary market, and it can still control who buys its stock.

That’s a template that only the highest valued Web 2.0 companies can follow, and if Elevation can raise a second fund, it’ll aim to compete with firms like DST to scoop up the best ones.