Red-hot deal site Groupon has been a tear lately. Hot off a $135 million funding round that valued the company at $1.35 billion, it recently acquired European deal powerhouse CityDeal, Chilean deal site ClanDescuento, and mobile development studio Mob.ly. But it seems that some of its expansion strategies are downright shady: we’ve received three separate reports that ClubeUrbano, Groupon’s Brazilian site that it acquired earlier this month, is loaded with fake deals and venues that don’t even exist. As one source put it: “Fake names, stock photos, fake addresses, everything.”

We reached out to Groupon, which confirmed that the majority of the deals are not real, save for one running in São Paulo — deals from the site’s 30+ other locations are for venues that don’t exist. So why is this happening? Groupon President Rob Solomon explains that Groupon’s standard practice when it expands to a new market is to show users examples of the kind of deals they could get once the site goes live in their city. All of the fake deals on ClubeUrbano, he says, are meant to serve this purpose, but he concedes that Groupon has “done a terrible job of calling that out on the website”. Soloman says this will be fixed immediately.

In other words, up until now there hasn’t been anything on the site explaining that these deals were merely examples. Granted, users haven’t been able to sign up for these deals so they haven’t lost any money, but this is still shady — it makes the site look far more popular than it actually is, which could be used to both attract more customers and more businesses clients. Also odd is the fact that the phone number listed on ClubeUrbano doesn’t work (Solomon says that the number is real, and that Groupon is working with the phone company to get it working).

Could this just be an honest mistake, where a designer forgot to clarify that these deals were merely examples? Sure. But I seriously doubt we’re the first to raise questions to ClubeUrbano about the validity of its deals — something doesn’t smell right. That said, even if this was done deliberately, Groupon HQ may have been unaware of the practice — Groupon’s Latin American sites, including ClubeUrbano, are being run by its recently acquired CityDeal team, which is based in Berlin.

Groupon was also criticized when it acquired Chilean site ClanDescuento, as bloggers alleged that the site had built up its user base through agressive spam tactics. 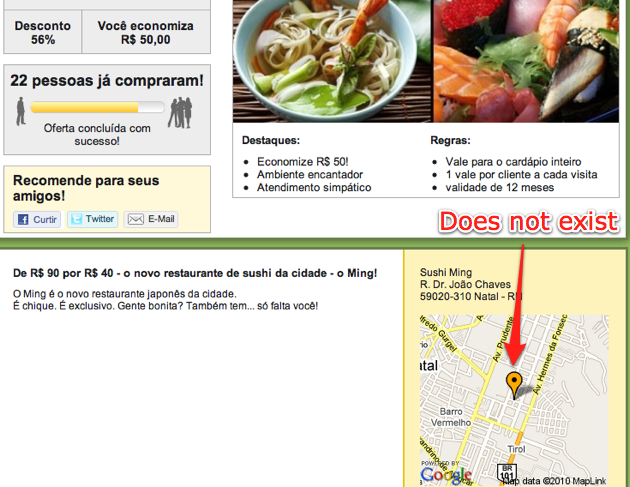 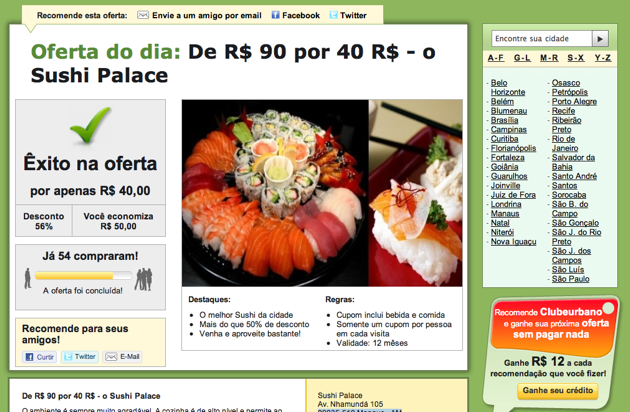