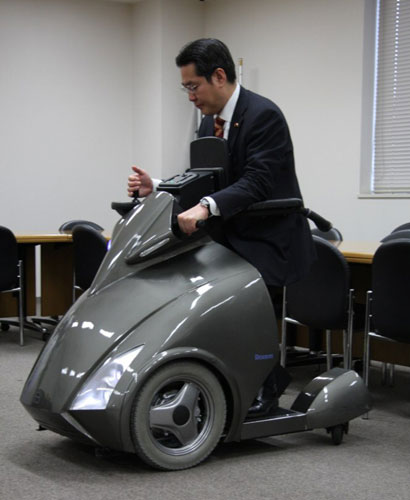 There’s certainly no shortage of so-called mobility robots, but major Japanese robot maker tmsuk‘s offering seems to be quite cool. In fact, the RODEM (short for “Robot De Enjoy Mobility”) is being pitched as a mix between robot, wheelchair and ultra-small vehicle (or “Universal Vehicle” [JP, PDF], in tmsuk’s marketing language).

The RODEM has been around for a couple of months, but tmsuk recently let a member of Japan’s Lower House in Tokyo (pictured above) drive around in the newest version (finding ways to cope with the nation’s rapidly graying population is one of the hottest topics in Japanese politics today, which means advances in medical technology are sure to get attention even from high-profile politicians). 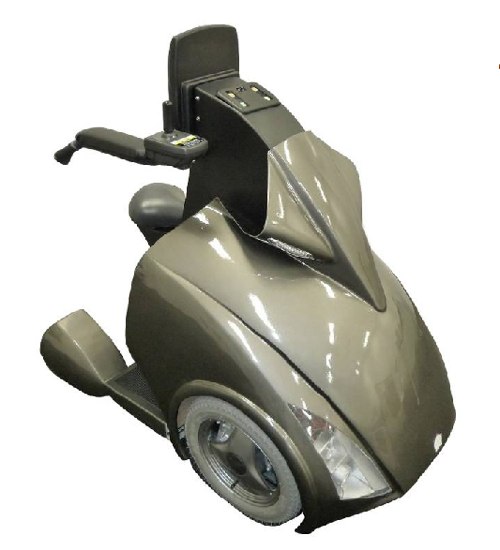 The vehicle is designed to be used indoors, mainly by older or physically handicapped people. Much like the Segway, the RODEM can be controlled by body movement (but there’s also joystick control).

Sized at 1220×690×1170mm, the robot, which is powered by a lead storage battery, weighs just 100kg. It can reach a top speed of 6km/h, features a turning cycle of just 850mm, and it can be equipped with GPS, voice recognition, vital data sensors and other extras.

tmsuk hopes to commercialize the RODEM with a price tag between $5,500 and $7,800 (depending on the number of extras).