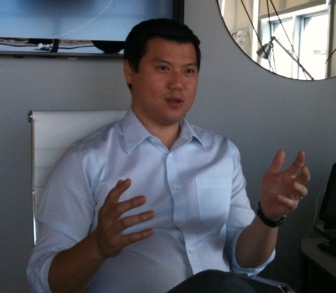 Looking around the web, it’s clear that live video streaming is on the rise. News sites are frequently embedding breaking content, artists are live-streaming their concerts as a promotion vehicle, and celebrities are increasingly broadcasting the mundane events of their daily lives (apparently lots of people like watching that sort of thing too). But there are still plenty of question marks — what exactly do people want to watch streamed live? How are they going to watch it? And how does YouTube play into all of this? Last week I sat down with Ustream CEO John Ham who shared some of his thoughts on the future of live streaming and how his company would fare over the next few years.

Our conversation was spurred by recent rumors that YouTube may be preparing to launch a live streaming service of some kind. There’s been talk of this for years — in fact, the feature was actually “confirmed” to be coming in 2008 by YouTube cofounder Steve Chen. That obviously didn’t happen, but in the last year or so YouTube has been ramping up the number of special partner live streams it’s involved in. These have included everything from concerts to the Indian Premiere League. And it seems like a broader launch could be the next step.

When I asked Ham what he knew about YouTube’s plans, he declined to get into specifics about what he had heard, though he did say that “Ustream is the leader today and we’re confident we will continue to lead the innovation of live, interactive video experiences on the web. We believe that it’s important to offer live video in an open, unlimited platform that can harness the value of a collective community.” (emphasis mine) I pushed for further details, but he wouldn’t budge. Reading between the lines, he seems to be implying YouTube may eventually launch livestreaming for approved partners only, and that there may be restrictions as far as how much content can be streamed. Of course, YouTube hasn’t actually announced anything yet, so take this with a grain of salt.

Ham claims that even if YouTube does start competing with Ustream, it would actually be good news for his company. He explains that if other companies are out on Madison Avenue evangelizing live streams, Ustream will benefit, especially since it already has a robust sales team in place. The same is true for the quality and amount of content that’s being produced for live streaming — if YouTube can help prove the market, Ustream will also see an influx of new content. Ham believes that Ustream is better positioned than its competition to feed off this increased awareness — he notes that Ustream has raised $90 million, including a massive $75 million round earlier this year, so it has a lot of flexibility. Competitor Livestream has raised around $13 million, and Justin.tv has raised $3-4 million. And he says that according to Quantcast, Ustream’s global reach is 2-3 times as large as these competitors.

But Ham says that YouTube isn’t the only potential new competitor — he pointed out that Yahoo previously attempted to enter the space with its own live streaming service, though they killed it less than a year later. He thinks that as live video becomes more popular, other companies will likely jump on the bandwagon.

So how will Ustream rise above the competition? Along with its ample funding, Ham points to the infrastructure that Ustream has built out over the last few years. He says that Ustream doesn’t rely exclusively on a Content Delivery Networks — it taps into them, but it’s also built out its own global footprint. It has also built-in tools that can downgrade a stream’s bitrate on the fly if a user has a slow or bandwidth-restricted Internet connection. And its infrastructure is optimized for live video, and not on-demand (he says that the technical challenges faced by each are quite different).

My next question concerned where and why people would actually want to consume live video content — the fact that it’s live means that users could easily miss out on content they might be interested in, whereas with on-demand video like YouTube they can watch it at their convenience. Ham says that Ustream is taking the “three screen” approach, where users will watch content from their phones, TVs, and PCs. With alerts, users will be notified as soon as a stream that Ustream believes they’ll find interesting has gone live. And he says that live streaming has already started to get some traction with premium partners, pointing out Jimmy Fallon’s recent use of the service. Ustream is also opening up an office in Los Angeles as a way to demonstrate its commitment to these content providers, so we’ll probably start to see the number of premium channels increase.

Time will tell if Ham’s predictions hold up. YouTube has become synonymous with video on the web, and even if it does launch with a more closed platform than Ustream (which isn’t a given), it would still pose a very formidable foe.  That said,  Ustream already has relationships with plenty of artists, celebrities, and content owners, so it has a big head start when it comes to live video. In any case, there’s clearly plenty of room for more than one big player to succeed in this space — YouTube isn’t going to kill Ustream any time soon.